Organizer Jeffrey Weingarten set the bar pretty low for the Uni-Tea diversity rally today, saying that if even one “other than white” person attended, they’d consider the event a success.

So I guess, by that standard, it was a success. There were at the very most 200 people, counting a couple dozen members of the press (it was hard to get a better count, since the area is also frequented by tourists there to see Independence Hall and the Liberty Bell).

The crowd was serenaded by The Bangers and their American Heroes and Patriots Tour™ (featuring appearances by Rita Cosby), a mediocre rock band with song lyrics like “Thank God for you/You protect us from terror.”

The lead singer urged people go up to any veterans at the rally “and give him a big hug.” Then he exhorted the crowd: “The left will never be right” and announced ear plugs would be distributed to the crowd “for the left ear only.” (Get it?)

I walked around and talked to a few people in the sparse crowd. Linda Hertzog, 62, a housewife, lives in suburban West Chester, PA and is active in the Valley Forge Tea Party group.

“I’m here supporting my brothers and sisters,” she said. “We’re told we’re a majority white organization, and we have African-American speakers here today. I wanted to support them.”

She spoke of capitalism being “demonized” and insisted the reason corporations were sitting on record cash reserves was because of the “uncertainty” of Obama’s policies. (And here, I find them predictably pro-corporate. Go figure!)

“How many people are in the stock market? We have to protect them,” she said.

College student Matt Hissui, 21, and bartender Brendan Kissam, 25, are self-described gay conservatives. “Just because you’re gay doesn’t mean you have to be a liberal,” Hissui said.

“I advocate a government so small, it can fit into a clutch purse at the Tonys,” Kissam said. Oo, snap!

Hissui, a libertarian, is all for legalizing drugs — but not gay marriage. (Something to do with Anglo-Saxon law and “morality.”) Although a member of College Republicans, he said, he was frustrated. “The party’s umbrellas is little, they don’t want to expand.”

Mark Hutchinson, 52, of Mays Landing, NJ, carried a New Jersey state flag. He’s a retired chef who, unlike the other attendees I spoke to, has actually been concerned about constitutional issues for a while, through a militia-type website called LibertyandProsperity.org.

He’s most concerned about government spending. When I asked which spending, he replied, “All of it. We don’t need cash for clunkers, buying auto companies. This stimulus spending is nothing but a slush fund for Obama and his cronies.”

I pointed out that war spending dwarfed all that, and asked why that didn’t upset him. He sidestepped the question: “Congress needed to declare war. Congress abdicated its responsibilities.”

While trying to talk to people who have such a narrow perspective does make my head hurt, I do identify with their sense of frustration. It’s that to them, the solution is to embrace an extreme, uninformed ideology that dismisses nuance, and doesn’t leave much room for common ground. (It’s very disorienting to talk to people who have more sympathy for corporations than the unemployed.)

The right wing supplies them with a consistent narrative that validates their worldview, and as I walked away, I thought that it was a damned shame progressives couldn’t figure out an effective way to get their message through. When I said that to my friend R., she quickly set me straight. “They’re Republicans who want to accept the re-branding because Republicans have fucked everything completely up.” So these are not people who can be persuaded with facts they don’t even want to hear from us.

She went on to say:

They’re the perfect storm of non-critical thinking authoritarians who feel disenfranchised and accept blindly that it’s always their fellow victims who are holding them back. It’s not the corporations’ faults they’re unemployed–it’s illegal aliens stealing their jobs, it’s blacks unfairly being promoted over them because of affirmative action, it’s the liberals for demanding regulations to protect their safety or a minimal living wage.

Okay, she’s right. What was I thinking? 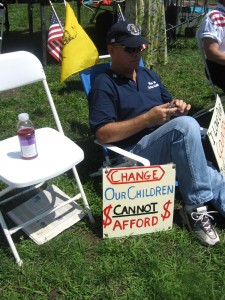