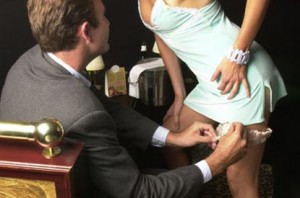 Remember: If at first you don’t succeed, just do it a lot harder (faster, longer) the next time!

Come on, admit it. You’re surprised, aren’t you? I am, too — that during this devastating recession, the Republicans still have the balls to offer these public lap dances to their wealthiest contributors:

After opposing, stalling, stonewalling and filibustering almost every recession-related bill for the past year, Republican lawmakers have finally proposed a jobs plan of their own: a bigger, more expensive version of George W. Bush’s tax cuts for the rich.

The Economic Freedom Act of 2010 — introduced by Reps. Jim Jordan (R-Ohio) and Jason Chaffetz (R-Utah) — proposes deep tax cuts favoring the wealthiest in America, a reduction in regulatory oversight and the elimination of a federal tax on the estates of millionaires, which will allow wealthy investors to escape taxes entirely on a significant portion of their income.

Republicans say the bill will create jobs where President Obama’s policies have failed to do so.

“The multi-trillion dollar government stimulus programs and taxpayer-funded bailouts have failed,” reads the bill’s official press release. “A growing private sector economy is the only ‘stimulus program’ that will create the jobs needed to restore America’s economic strength.”

House Majority Leader Steny Hoyer (D-Md.) said in a conference call on Tuesday that the GOP’s proposal will not only fail to stimulate job growth, but will triple the deficit by 2015 and devastate an already-shrinking American middle class.

“The tax cuts they want to give, as usual under Republican policies, will give 62 percent of the tax cuts to the top 1 percent of Americans,” Hoyer said. “Or said another way, an average $467 tax cut to working Americans in the middle of the income levels, and to the top 1 percent earners, an average of $157,000 tax cut, and to Goldman Sachs, $2.6 billion in tax cuts. When you analyze that, you know what is happening is the same old Bush policies of advantaging the wealthy at the expense of the middle income working people and tax cuts which did not, as they were advertised to, grow the economy and grow jobs. In fact, they did just the opposite.”

Michael Linden, associate director for tax and budget policy at the Center for American Progress Action Fund, said the Republican proposal is “unaffordable on a level we’ve never seen before.”

One thought on “Harder, Faster, Longer!”