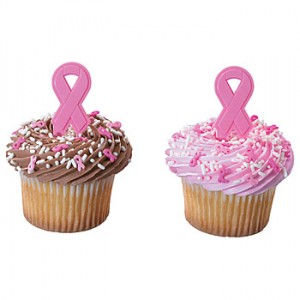 I so agree with this.

There are oh, so many things wrong with the selling of breast cancer. First of all, it’s important that we discuss everything but the environmental causes (water, air, food) because that might upset the multinational corporations who have already decided cancer is a rational tradeoff for high profits.

Let’s not forget the for-profit healthcare industry that will decide whether or not they feel like paying for your treatment. Several years ago, when I was out of work and scraped together the money to see a doctor for the flu, she urged me to go have a mammogram through a program for the poor.

“So suppose I have a mammogram, and it turns out I have breast cancer. I have no way of paying for treatment, and no one’s offering to do it for free, so what’s the point?” I said. I was angry.

She didn’t have an answer.

But the part that really irks me? The girly-girl frilliness, the infantilization that’s been attached to the disease. I got a catalog a few weeks ago that included a whole section of obnoxiously “cute” pink items in honor of Mammary Gland Cancer Month. (It reminds me of when I was a little kid – I got all this pink stuff I didn’t want. I liked trucks, and cowboy hats, and toy guns. As an adult, I do wear pink — but not with little ruffles and bows all over it. After all, I’m not four.)

And yes, I’m also one of those people who yells at OB-GYNs. “Don’t tell me to ‘scootch’ down to the end of the table, it’s not even a real word,” I told one. “It’s a cutesy word, the kind you use with small children. I’m a grown woman, talk to me like one.”

Cancer is not a pink ribbon. It’s not a marketing campaign to “Save The Boobies.” It’s a pretty crummy disease that far too often kills people, and if it doesn’t kill you, it may bankrupt you.

If you really must sell cancer accessories, I’d much rather have an Amazon warrior breastplate and a sword than some cutesy pink T-shirt.