So the New York Post publishes these anonymous accusations that the NYC sanitation workers staged a work slowdown during the blizzard to protest the job cuts. Naturally, we have no way of verifying the story, since no names were included.

But let me point something out. If the union members did stage a slowdown, so fucking what? In the political arena today, exactly how many other tools do public sector workers have to protect their jobs in the budget-cutting frenzy?

Yes, I’ve read that there were people who died because the ambulances couldn’t get them to the hospital. That’s a real shame, and of course we don’t know whether they would have died anyway. But ask yourself this question: How many people are dying right now (or killing themselves) because they’re jobless, uninsured and at the end of their ropes?

Where’s the outrage about that?

I don’t know for certain if this happened, but I don’t care if it did. Remember, we live in a country where, not so very long ago, cops were called out to kill striking workers. If workers used whatever leverage they had to make their point, more power to them. 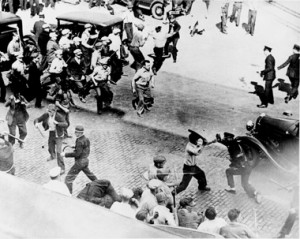