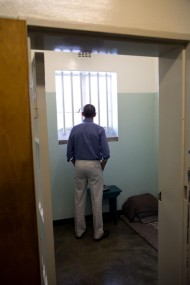 I saw the picture this morning of Obama standing in Nelson Mandela’s jail cell, and all I could think was how Obama could never have stood up to power like that. After all, Obama is a constitutional law lecturer who has legalized massive surveillance and indefinite detention. (And by the way, it’s widely believed that a CIA tip led to Mandela’s incarceration.)