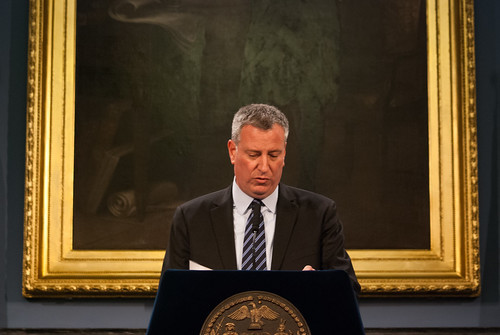 Jesus. Let him go live in Gaza for a week:

According to an edited audio recording obtained by the site (below), de Blasio said that “part of his job description is to defend Israel” and that it is “elemental to being an American, because there is no greater ally on earth, and that’s something we can say proudly.”

The Israel lobby’s event was closed to journalists and the speech did not appear on the mayor’s public schedule, arousing suspicion and making the event all the more intriguing. A reporter with Capital who tried to get into the event was escorted out by security.

De Blasio said in his speech that he had visited Israel three times, most recently with his wife and son, and that he was especially moved by visiting Sderot, on the border with the Gaza Strip and often the target of rocket attacks.

“You can’t have an experience like that and not feel solidarity with the people of Israel and know that they’re on the front line of fighting against so many challenges.”