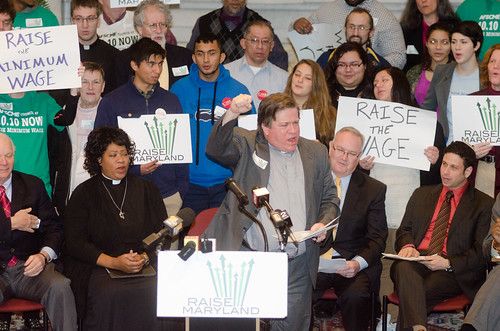 The New York Times points out the financial interests behind the fight against a minimum wage increase. Of course, they still do their “both sides do it” routine, but it’s a change in emphasis worth mentioning:

The campaign illustrates how groups — conservative and liberal — are again working in opaque ways to shape hot-button political debates, like the one surrounding minimum wage, through organizations with benign-sounding names that can mask the intentions of their deep-pocketed patrons.

They do it with the gloss of research, and play a critical and often underappreciated role in multilevel lobbying campaigns, backed by corporate lobbyists and labor unions, with a potential payoff that can be in the millions of dollars for the interests they represent.

“It is the way of Washington now — and that is unfortunate,” said John Weaver, a Republican political consultant who has helped run several presidential campaigns. “Because if it’s not dishonest, it’s at least disingenuous.”

In this case, the policy dispute is over whether increasing the minimum wage by nearly 40 percent to $10.10 an hour by next year would reduce poverty or further it.

Even if the legislation never passes — and it is unlikely to, given the political divide in Congress — millions of dollars will be spent this year on lobbying firms, nonprofit research organizations and advertising campaigns, as industry groups like the National Restaurant Association and the National Retail Federation try to bury it. Liberal groups, in turn, will be spending lots of money as they try to make the debate a political issue for the midterm elections.

The left has its own prominent groups, like the Center for American Progress and the Economic Policy Institute, whose donors include nearly 20 labor unions, and whose reports, with their own aura of objectivity, consistently conclude that raising the minimum wage makes good economic sense. But none has played such a prominent and multifaceted role in recent months as the conservative Employment Policies Institute.

The Employment Policies Institute, founded two decades ago, is led by the advertising and public relations executive Richard B. Berman, who has made millions of dollars in Washington by taking up the causes of corporate America. He has repeatedly created official-sounding nonprofit groups like the Center for Consumer Freedom that have challenged limits like the ban on indoor smoking and the push to restrict calorie counts in fast foods.

2 thoughts on “This is new”