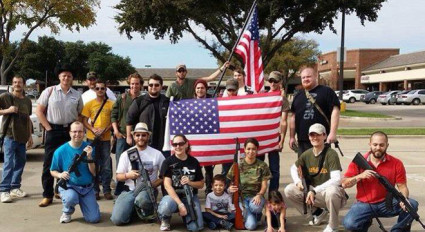 Let’s traumatize some college students to encourage them to carry guns to class!

In the wake of two terror attacks, two gun rights groups in Texas have decided now is a good time for a mock mass shooting.

Come and Take It Texas and DontComply.com are planning the emphatic demonstration on the campus of University of Texas in Austin on Saturday.

The groups will “take to the streets armed with rifles and pistols on display followed by a crisis performance,” according to a press release posted on Facebook.

Fake blood will be used, the groups’ spokesperson Matthew Short told the Statesman.

“We want criminals to fear the public being armed,” he told the newspaper. “An armed society is a polite society. We love freedom and we’re trying to make more freedom.

“In the wake of yet another mass shooting one thing is clear, Gun Free Zones are killing us,” the groups said in the press release. “These target rich environments are letting our children be murdered by evil people. Now is the time to stand up, take a walk, and put pressure on politicians to ban Gun Free Zones.”

3 thoughts on “What a great idea”