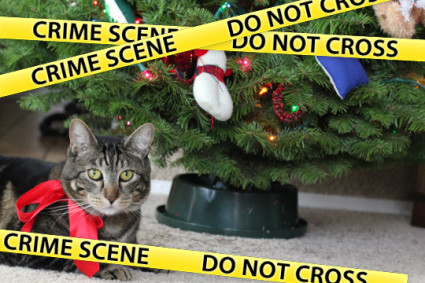 A friend sent me this and asked me to post it anonymously, not wanting to put a spotlight on the neighbors who were killed:

My neighbors were murdered on Christmas Eve.

Well, most of that sentence isn’t true; they were a few doors down, and one was a suicide, and they actually died on December 23rd – but it was probably Christmas Eve somewhere in the world, and the police weren’t notified until the 24th, and they were still on the scene ducking under yellow tape when I got home from work.

There was little information out. Facebook said that one body had been transported. I texted a friend who has contacts, and I called a friend who knows me, and knows my house and my neighborhood, so I could start stringing together words and thoughts – and went upstairs to start baking our traditional Christmas cake. Was it a burglary gone bad? Who would break into her house – she was so sweet. Why would they?

Info started coming; two women and a man. The police got on the Facebook page and deleted all the gossip, put up a statement that actual facts would be coming soon, please be kind.

Then: Three people dead in a probable double homicide and suicide.

Then: It seems clear that the man shot and killed the two women and then committed suicide. No note. Delay in releasing the names, difficulty notifying the relatives. A relative had entered the swelling and found the man, and called the police.

I did a lot of angry speculation, the usual suspects; patriarchy, culture of gun violence. Then I found out he’d been in Afghanistan. Contractor? Armed Services? I don’t know.

I went to the visitation. The relatives said the grandkids were in shock.

The thing is, I think the kids were the ones to find the first body, running in to say Merry Christmas and hug their grandma.

So talk to me with all your bullshit about rights and might makes right and all that crap. Bring the war home with you, like shit you can’t scrape off your shoes. But hold this one thought in your head for a minute.

I think the kids were the ones to find the first body.