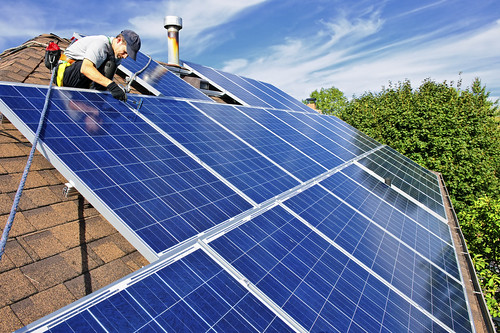 God, I hate Republicans. They just can’t allow anything good to happen, people might get ideas:

Although Nevada is one of the sunniest places in the world, there has recently been a dark cloud hovering over the rooftop solar industry in the state. Just before Christmas, Nevada’s public utility commission (PUC) gave the state’s only power company, NV Energy, permission to charge higher rates and fees to solar panel users – a move that immediately shattered the rooftop solar industry’s business model.

In addition to the new monthly fee, which will increase to $40 from $12 over the next five years, customers like Stewart will get less back from the utility for energy their solar panels capture and feed into the main power grid. Whereas previously they received full retail value for their surplus electricity, soon NV Energy will only pay a third of that price for exported electricity.

The uneven effect would be that during dark hours and cloudy days, solar customers could pay full price for energy, even after contributing two or three times as much electricity to the power grid during the same day. As the Alliance for Solar Choice frames it, the $40 fee eliminates the $11 to $15 solar users typically save on their monthly electricity bills.

“It’s simple math,” said Bryan Miller, president of the Alliance for Solar Choice. “The commission eliminated all solar savings. People would pay more for going solar rather than less. It has left companies no choice but to stop doing business in the state.”

The changes by NV Energy are part of a national trend in big utility companies arguing to eliminate the financial incentive to switch to rooftop solar, though Nevada is the only state thus far to grant such a change while also applying the new rules retroactively to existing customers.

Nevada’s governor, Brian Sandoval, and NV Energy defended the PUC decision, saying that the current rate structure put too large a burden for maintaining the grid on non-solar consumers. In an emailed statement, NV Energy wrote that the revised rate structure “fairly allocates the costs of providing electric service among all customers” and “results in no additional profit to NV Energy”.

An independent study commissioned by the state legislature in 2013 concluded, however, that solar users created a $36m net benefit for traditional customers, a finding NV Energy dismissed as reliant on outdated solar pricing data.

Rooftop solar companies have sternly rebuked Sandoval, noting that he courted their businesses and incentivized the industry in what they are now calling a bait-and-switch.