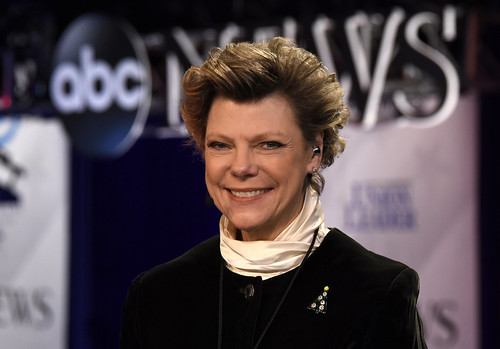 Over at NPR, also known as Nice Polite Republicans:

Oreskes directed Roberts to explain her reasoning behind her column — both the substantive case and Roberts’ conviction she had a right and need to articulate it — in a conversation with Morning Edition host David Greene broadcast early Monday.

“Our journalists have clear instructions,” Oreskes wrote in his memo, sent to staffers Monday morning. “We do not support or oppose candidates. We don’t advise political parties. We gather the news and seek as many points of view as we can. Cokie’s role has evolved into being one of those points of view.”

In the Morning Edition interview for broadcast Monday, Greene asked Roberts: “Objectivity is so fundamental to what we do. Can you blame people like me for being a little disappointed to hear you come out and take a personal position on something like this in a campaign?”

Roberts is not the only veteran journalist to take unusual exception to Trump. In a pointed commentary that aired on NBC Nightly News in December, retired NBC anchor Tom Brokaw denounced Trump’s “dangerous proposal” for Muslims to be prevented from entering the country. Brokaw, now a senior news analyst for NBC, said it “overrides history, the law and the foundation of America itself.”

In an interview granted Sunday night for this article, Roberts was asked whether she had approached her job any differently with the title “commentator” rather than “analyst.” She replied, “The answer has got to be, ‘No.’

Roberts cited her family’s own dedication to public service — not just the congressional careers of both of her parents but, she said, a family tradition reaching back to the American Revolution. Roberts particularly pointed to Trump’s sharp rhetoric on Mexicans and Muslims and his seeming encouragement of violence toward protesters.

“We are in a time where we have the possibility of going backward instead of forward,” Roberts said. “What’s so incredibly wonderful about this country — which I believe is great and does not need to be made great — is our constant infusion of new people with new energy and new ideas.