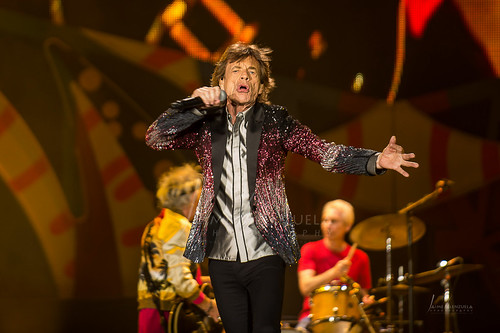 What a thug Trump is. He made a deal that the Rolling Stones would do a pay for view event at one of his Atlantic City venues, but Trump wasn’t allowed to show up or promote his connection. Guess what happened:

They call me back, at which point Keith pulls out his knife and slams it on the table and says, “What the hell do I have you for? Do I have to go over there and fire him myself? One of us is leaving the building – either him, or us.” I said, “No. I’ll go do it. Don’t you worry.”

I run over. He’s up there again! I go [gives the come here gesture]. We go into the hallway. I said, “Donald. You lied. You broke your promise. One of two things is going to happen. You’re going to leave the building and, at 6:40, The Rolling Stones are going to speak on CBS News, or you’re not going to leave the building and I’m going to go on and do an interview to explain to the world why the pay-per-view was canceled. I know it’s your building and…” – and in my head I’m going, this is so crazy, right? I’m trying to throw Donald Trump out of his own building.

But, anyway, the bottom line is I look at Donald and said, “You and Marla (Maples) have to go. You’re fired.” He looks at me and goes berserk.

“You don’t know anything! Your guys suck! I promote Mike Tyson! I promote heavyweight fights!” And I notice the three shtarkers he’s with, in trench coats, two of them are putting on gloves and the other one is putting on brass knuckles. I go on the walkie-talkie and I call for Jim Callahan, who was head of our security, and I go, “Jim, I think I’m in a bit of trouble.” And he says, “Just turn around.”

I turn around. He’s got 40 of the crew with tire irons and hockey sticks and screwdrivers.

And off he went.

And that was the night I fired Donald Trump.

3 thoughts on “When the Rolling Stones fired Donald Trump”