Right wing media is canonizing Rittenhouse because they can use him to justify a call to arms against those they disagree with.

A secret tape made after Columbine shows the NRA's evolution on school shootings https://t.co/LJM1ZqFs54

Sam Alito: “There are not enough guns on subways and in schools today. Please add many more. I am not a crackpot.” https://t.co/wf6s5Oj1Cl

You might not remember this, but in 2016, I was told that NRA guys were coming in, changing their same-day voter registration for the primaries, and voting for other Dems to screw with Clinton –and it was happening in several states:

Tune into @WPXI tonight at 5:30 to hear @NicoleFordTV’s story about legislation that moved today in Harrisburg which would allow out-of-state groups like the NRA to sue PA towns for trying to prevent gun violence – AND stick taxpayers with the legal fees🤦‍♂️https://t.co/njFdXT6NCQ

A Washington state father was shot in the head and wounded while driving his two children around a neighborhood and trying to get them to sleep. He looked “suspicious” to the 23-year-old man who shot him. #waleg https://t.co/7UvA3VoRSL

This school shooting was yesterday in Arlington, Texas: 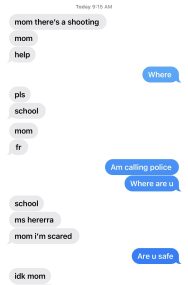 Of Course: NRA Board of Directors Votes Overwhelmingly to Re-Elect Wayne LaPierre https://t.co/3Qd45N4b6o

Sen. Ted Cruz pivots during a news conference from offering thoughts and prayers for the latest school shooting to saying, "we are here today because of the Biden border crisis." pic.twitter.com/BZ2dV5QbsB

Remington, the gunmaker being sued by nine families whose loved ones were killed in the Sandy Hook School mass shooting, has subpoenaed the academic, attendance and disciplinary records of five children and other records for four educators killed that day. https://t.co/6ZiRM9pHAL