For sexual harassment suits. Are they saying they can’t control themselves? 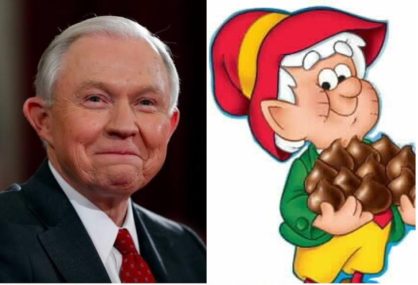 The Keebler Elf lied to Congress?

Sessions testified before Congress in November 2017 that he “pushed back” against the proposal made by former campaign adviser George Papadopoulos at a March 31, 2016 campaign meeting. Then a senator from Alabama, Sessions chaired the meeting as head of the Trump campaign’s foreign policy team.

“Yes, I pushed back,” Sessions told the House Judiciary Committee on Nov. 14, when asked whether he shut down Papadopoulos’ proposed outreach to Russia.

Sessions has since also been interviewed by Mueller.

Three people who attended the March campaign meeting told Reuters they gave their version of events to FBI agents or congressional investigators probing Russian interference in the 2016 election. Although the accounts they provided to Reuters differed in certain respects, all three, who declined to be identified, said Sessions had expressed no objections to Papadopoulos’ idea.

One person said Sessions was courteous to Papadopoulos and said something to the effect of “okay, interesting.”

The other two recalled a similar response.

“It was almost like, ‘Well, thank you and let’s move on to the next person,’” one said.

An early dispatch from D.C., where protesters are still gathering:

Demonstrators from the Occupy movement rallied outside the U.S. Capitol on Tuesday to protest against the influence of money on Congress.

In a sign of renewed vigor for the Occupy movement, which staged protests in many U.S. cities last fall, several hundred protesters gathered on the Capitol’s West Front Lawn to greet members of Congress returning from a holiday break with a day of rallies and protests they said would include attempts to occupy lawmakers’ offices.

Occupy protesters from around the country who gathered on the rain-soaked lawn carried signs saying, “Face it liberals, the Dems sold us out,” “Congress for sale” and “Congress is not for sale.”

“It’s important to let people know we’re not going to take it anymore. People are really mad about the way things are going and we want Congress to understand that,” said protester James Cullen, a 30-year-old unemployed social worker fromGreenbelt, Maryland.

The morning demonstration was peaceful. Police said one protester had been arrested for assaulting a police officer.

The protest against Congress comes as a record 84 percent of Americans say they disapprove of the way Washington lawmakers are doing their job, according to a Washington Post/ABC News poll published on Monday.

If you haven’t seen Naomi’s Wolf’s analysis of the nationwide, federally supported crackdown against Occupy encampments, that’s because you don’t read Reader Supported News or foreign newspapers such as The Guardian. More here.

At the time of the betrayal, the Daily Kos crowd and other Obama-bots insisted Elizabeth Warren didn’t really want the CFPB job, that the president had stood up for her, that it was her decision not to go through the arduous process of trying to get Congressional approval. This was all bullshit. More here.

It was excessively generous of Paul Krugman to describe Barack Obama’s jobs plan as “bold,” given the fact that it’s long-overdue and just happens to coincide with the start of Obama’s re-election campaign…

I received a message from the president late Thursday afternoon as he was preparing for tonight’s important jobs speech. The chief used “David” in his salutation and signed his e-mail “Barack.” I was so moved by this personal gesture, I had to reply…

The Onion’s Obama birthday joke was satire, I guess, in the lamest sense of the word. Here’s how it would read if the Onion writer had acknowledged what happened this week in D.C.