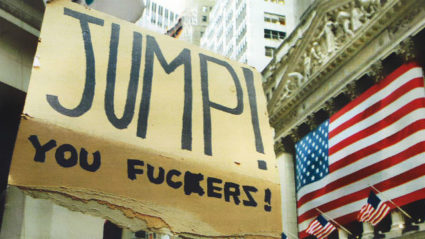 They really don’t care who or what they hurt:

Spearheaded by House Finance Chair Rep. Jeb Hensarling (R-TX), the Choice Act begins by throwing out much of the banking oversight passed under President Obama’s administration, mostly through the Dodd-Frank act signed in 2010. But it goes further than that, rolling back oversight in a way that could dramatically exacerbate the likelihood of another financial crisis, according to experts in financial regulation.

“It’s a little hard to get your mind around everything this bill does, because there’s almost no area of financial regulation it doesn’t touch,” says Marcus Stanley, policy director for Americans for Financial Reform. “There’s a bunch of very radical stuff in this bill, and it goes way beyond repealing Dodd-Frank.”

It could also expose the hollowness of Trump’s campaign promises. Trump ran on slamming Wall Street for “getting away with murder” and arguing that Goldman Sachs had “bled our country dry.”

But the bill looks to some like a wish list of what advocates and lobbyists for the banking industry have demanded. Among the provisions that have most alarmed progressives on the Hill is its proposed elimination of the “Volcker Rule,” which prevents commercial banks from making certain kinds of speculative and risky trades.

The Choice Act would also gut the Consumer Finance Protection Bureau, the brainchild of Sen. Elizabeth Warren (D-MA). As Mike Konczal wrote for Vox, the CFPB has won millions from big corporations by suing those who use “deceptive practices” for their customers. Hensarling’s bill wouldn’t get rid of CFPB entirely, but advocates say it would effectively render the agency powerless by letting Congress control its funding, allowing the White House to fire the agency’s director at will, and, perhaps most importantly, stripping it of a broad range of rulemaking authority.

When Barack Obama took office, it was almost embarrassing to watch so many otherwise intelligent people rejoice at the notion that he could do good and yet remain closely allied with the corrupt banks that had wrecked the economy. Most people know better now, but does Obama? More here.

OK, we knew this all along, but I still winced when I read it in Firedoglake:

For perhaps the first time, President Barack Obama was forced to explain why there have been no prosecutions of Wall Street executives for their fraudulent actions during the run-up to the financial crisis. Asked by Jake Tapper to explain this behavior, Obama basically suggested that most of the actions on Wall Street weren’t illegal but just immoral, and that his Administration worked to re-regulate the financial sector with the Dodd-Frank reform legislation.

“Banks are in the business of making money, and they find loopholes,” the President said. Apparently forging and fabricating documents to prove ownership of homes that are subsequently stolen from borrowers is now a loophole.

The Occupy movement, as it spreads from New York City to all parts of the country, is shining a light on all those murky-minded Democrats who haven’t had the balls to speak up for the unemployed, the underemployed, the homeless, the near-homeless and all the other beleaguered people the Dem Party used to represent. More here.