Trump pulls out of Iran agreement, Netanyahu now announces Iranian troops are massing on his border — so he has an excuse. Trump has removed the last obstacle for Bibi, and now all hell’s gonna break loose.

Which means Jesus is coming back. Hallelujah!

On days like today, I'm filled with nothing but contempt for those who stupidly and repeatedly claimed in 2015 and 2016 either that 1) Trump and Clinton were 'the same', or 2) Trump would be less hawkish/dangerous than Clinton. #IranDeal

With an avalanche of lies, Trump violates the strongest anti-nuclear accord of the past decades, breaks faith with our allies, weakens America’s security, and puts us in a path to war. I will discuss @MSNBC in 3 o’clock hour. #IranDeal

I have served with foreign Soldiers and armies all my professional life – including Iranian. The American Military word was trusted. I deeply regret @realDonaldTrump decision to walk away from the Iran Deal. He dishonors America and puts us and our allies at risk. #IranDeal 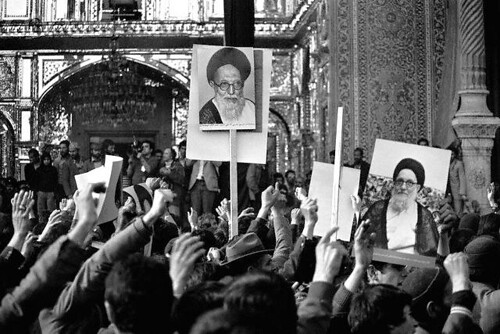 Hearing rumors etc. from the intelligence community that fall right in line with this: namely, that Trump is being paid off to invade Iran at the behest of the Saudis. And once again, it is all about the oil:

As the White House formulates its official policy on Iran, senior officials and key allies of President Donald Trump are calling for the new administration to take steps to topple Tehran’s militant clerical government.

Supporters of dislodging Iran’s iron-fisted clerical leadership say it’s the only way to halt Tehran’s dangerous behavior, from its pursuit of nuclear weapons to its sponsorship of terrorism. Critics say that political meddling in Iran, where memories of a 1953 CIA-backed coup remain vivid, risks a popular backlash that would only empower hard-liners.

That’s why President Barack Obama assured Iranians, in a 2013 speech at the United Nations, that “we are not seeking regime change.”

But influential Iran hawks want to change that under Trump.

“The policy of the United States should be regime change in Iran,” said Sen. Tom Cotton (R-Ark.), who speaks regularly with White House officials about foreign policy. “I don’t see how anyone can say America can be safe as long as you have in power a theocratic despotism,” he added.

Cotton advocated a combination of economic, diplomatic and covert actions to pressure Tehran’s government and “support internal domestic dissent” in the country. He noted that Iran has numerous minority ethnic groups, including Arabs, Turkmen and Balochs who “aren’t enthusiastic about living in a Persian Shiite despotism.”

What could go wrong?

Is Benjamin Netanyahu taking heat from U.S. legislators for publicly disrespecting Barack Obama? Are you kidding? Congress is too busy bowing to the American Israel Public Affairs Committee, the pro-Israel lobbying group, which just happens to be meeting in Washington this weekend. More here.

… goes to Israel Prime Minister Binyamin Netanyahu, who criticized US Joint Chiefs of Staff Chairman General Martin Dempsey for urging Israel to postpone strikes against Iran. Netanyahu said Dempsey’s remarks “served the Iranians,” even though the U.S. has backed Israel in Middle East conflicts for well over a half-century. No word on Dempsey’s response to Netanyahu, although “Shut the fuck up,” would do nicely.

The announcement of the Iranian government that it will activate its Fordow nuclear enrichment site has predictably drawn forth a new round of war propaganda from the Secretary of State Hillary Clinton. In contrast, the Chinese media accurately report Iran’s affirmation that the new site will be subject to UN inspections and so is perfectly legal.

Ironically, what Clinton says is diametrically opposite from the repeated assurances given by Secretary of Defense Leon Panetta, that Iran is not trying to construct a nuclear warhead. True, he put it in a misleading way, saying that Iran “is not yet building a bomb,” as though it is only a matter of time. But in order to build a bomb, Iran would have to deny access to UN inspectors and, well, initiate a program to build a bomb. That it has not done so is covered up in mainstream US political and journalistic discourse, to the point where the NYT had to apologize for stating (contrary to Panetta) that Iran has a nuclear weapons program (it does not, as far as anyone can tell).

And now, it turns out, the Obama administration is even willing to admit the truth. The sanctions regime on Iran is not even primarily about the civilian nuclear enrichment program (to which Iran has a right under the Nuclear Non-Proliferation Treaty), but about causing the regime to collapse. (Apparently the appearance in print with its admission of illegal motives provoked a sharp set of phone calls and a revision of the statement to merely a collapse of the nuclear program. I believe WaPo got it right the first time.)

I think blockading a civilian population for the purpose of instituting regime change in a state toward which no authorization of force has been issued by the UN Security Council may well be a war crime. Even advocating a war crime can under some circumstances be punishable, as happened at the Nuremberg trials.

This should be interesting. How will Barack Obama react if Benjamin Netanyahu tries to start World War III?

President Barack Obama and Israeli Prime Minister Benjamin Netanyahu are engaged in intense maneuvering over Netanyahu’s aim of entangling the United States in an Israeli war against Iran.

Netanyahu is exploiting the extraordinary influence his right-wing Likud Party exercises over the Republican Party and the U.S. Congress on matters related to Israel in order to maximise the likelihood that the United States would participate in an attack on Iran.

Obama, meanwhile, appears to be hoping that he can avoid being caught up in a regional war started by Israel if he distances the United States from any Israeli attack.

New evidence surfaced in 2011 that Netanyahu has been serious about dealing a military blow to the Iranian nuclear programme. Former Mossad chief Meir Dagan, who left his job in September 2010, revealed in his first public appearance after Mossad Jun. 2 that he, Israeli Defence Forces (IDF) chief Gabi Ashkenazi and Shin Bet chief Yuval Diskin had been able to “block any dangerous adventure” by Netanyahu and Defence Minister Ehud Barak.

The Hebrew language daily Maariv reported that those three, along with President Shimon Peres and IDF Senior Commander Gadi Eisenkrot, had vetoed a 2010 proposal by Netanyahu to attack Iran…

It was a nice surprise to see a smidgeon of actual history in a newspaper — an explanation in the NYT for Iran’s deep hostility toward Britain, providing context for the story of the storming of the British Embassy earlier this week. More here.