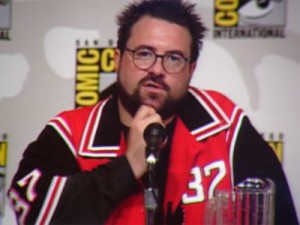 You may have already heard that “Clerks” director Kevin Smith was thrown off a Southwest Airlines flight yesterday for being too fat – after he was buckled in.

So take the mistreatment of a geek cult hero, add his Twitter feed with over a million and half followers (ThatKevinSmith), and you have a well-deserved public relations nightmare. In a stunning display of the power of new media vs. old, Kevin (who’s famous for his colorful language on Twitter) is not holding back on this one. He’s got up a podcast, too:

Director Kevin Smith was ejected from a plane after being deemed “too fat to fly,” he says on his Twitter account.

After delivering a speech in San Francisco, he boarded a Southwest Airlines flight to Burbank and was seated on the plane but then was thrown off the flight Saturday evening. The director of Clerks and other movies, who is also known for playing the movie character Silent Bob in many films, fired off a round of Twitter messages aimed at Southwest. Among them, “Fair warning folks: If you look like me, you may be ejected from Southwest Air.” A spokesperson for Southwest Airlines wrote an apology on the company’s Twitter account. The message, from an unnamed representative, says “Hey Kevin! I’m so sorry for your experience tonight! Hopefully we can make things right.”

Have any of you ever had a similar experience?

10 thoughts on “Silent Bob Vs. Southwest”