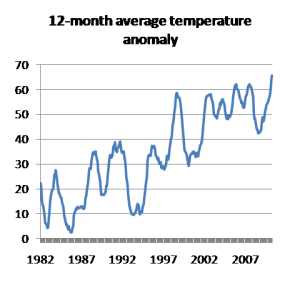 Graph via Paul Krugman, who points us to this important story:

The record temperatures we’re seeing now are especially impressive because we’ve been in “the deepest solar minimum in nearly a century.” It now appears to be over. It’s just hard to stop the march of manmade global warming, well, other than by reducing greenhouse gas emissions, that is.

Most significantly, NASA’s March prediction has come true: “It is nearly certain that a new record 12-month global temperature will be set in 2010.″

Software engineer (and former machinist mate in the US Navy) Timothy Chase put together a spreadsheet using the data from NASA’s Goddard Institute for Space Studies (click here). In NASA’s dataset, the 12-month running average temperature record was actually just barely set in March — and then easily set in April.

Actually, NASA first made its prediction back in January 2009:

Given our expectation of the next El Niño beginning in 2009 or 2010, it still seems likely that a new global temperature record will be set within the next 1-2 years, despite the moderate negative effect of the reduced solar irradiance.”

Of course, there never was any global cooling — see Must-read AP story: Statisticians reject global cooling; Caldeira — “To talk about global cooling at the end of the hottest decade the planet has experienced in many thousands of years is ridiculous.”

2 thoughts on “No Global Warming, Huh?”