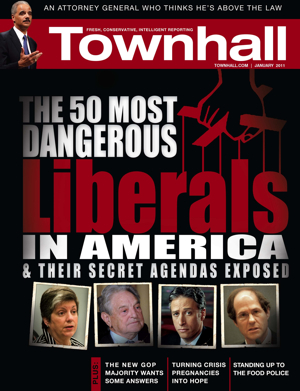 From an email that was sent out today:

Townhall Magazine Identifies the Top 50 Most Dangerous Liberals in the U.S.

Every conservative knows that liberals are working hard every day to recreate this country in their own image, tarnishing our great history and the hard-working people who live here. While some of the faces of the Left are too clownish to be taken seriously (see Keith Olbermann) others shy away from the limelight in order to push their agenda from behind a veil. Those people are some of the most dangerous liberals that threaten our way of life. Not to take away from some of the more obvious liberals, like the Barack Obamas and the Barney Franks of the world, there are many who push the leftwing radical agenda.

In the latest issue of Townhall Magazine we have identified the top 50 most dangerous liberals in America. We also have exposed their secret agendas, some as devious as any threat to the United States. Below are a few snippets from the list. Take a look and then get Townhall Magazine today!

Subscribe to Townhall Magazine today to get the entire list and you’ll also receive a FREE book from a conservative author!

Hmm. It seems to me that if these liberals are dangerous and devious, threatening our way of life, why, there’s really only one solution, right? There’s not an actual target painted on anyone, but I think the message is all too clear.

Civility! It’s only for Democrats!