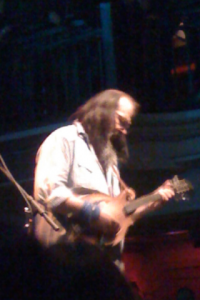 So we had dinner downstairs in Johnny Brenda’s before the show, and the only available seats in the dining room were right next to… Steve Earle, who was sitting at the small table right next to ours. I was trying to read the chalkboard menu, which was on the wall behind his head, but I didn’t want to look like I was staring at the celebrity. It was a fine line to walk.

Plus, I couldn’t decide what I wanted. Finally I said to Steve, pointing at his plate, “What’s that?”

“Mussels and sausage,” he said.

“Yep.” Then he started talking about how the sausage was supposed to be chorizo, but he didn’t think it was. He liked it anyway.

But our attention was really on Rocco, the absolutely adorable eight-month old who was the offspring of the diners on the other side of us. This baby had the cutest face, and just beamed at everyone. It was a pleasure just to see him smile. (How can you not love babies?)

By the way, Steve was right; the mussels and sausage were really, really good.

The show was a benefit for Witness to Innocence, an organization of exonerated death row survivors who fight against the death penalty. Ray Krone and Ronald Kitchen, two of the members, told their powerful stories to the packed house.

Then Steve came out, talked about his support for the cause, then told a funny story about showing up at a 5th century church in Rome to surprise Sister Helen Prejean (the anti-death penalty activist nun whose book inspired “Dead Man Walking”), who was speaking there. He said she saw him, just stopped her speech and said, “Steve Earle.” Pause. “In church.” Pretty funny.

He also spoke with great compassion for the people who actually had to perform the executions, pointing out that in many towns, there were few employment options. “They’re just doing their jobs,” he said.

The acoustic set started off with a cover of “Don’t Think Twice, It’s All Right,” which he dedicated to Suze Rotolo, his Greenwich Village neighbor, who died a few days ago. (An artist and red-diaper baby, she influenced Bob Dylan’s political songs — and love songs, too.)

He did some of his real oldies — “Copperhead Road” was one — “Didn’t Think I’d Live This Long,” from his upcoming album; “Ellis Unit One” (from “Dead Man Walking”), “The Mountain,” and one of my favorites, “Galway Girl,” for which he played mandolin. (See picture.)

When he returned for an encore, he introduced “Jerusalem” by saying that he just had to believe one day that it would be true, or he couldn’t get out of bed in the morning. (Me, too, Steve.)

And I almost listened to him
Yeah, I almost lost my mind
Then I regained my senses again
And looked into my heart to find

And I believe that on that day all the children of Abraham
Will lay down their swords forever in Jerusalem.