I’ve updated this story, because it’s even more interesting than I first thought.

It’s all in the Republican family! Corruption, I mean: 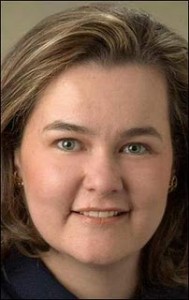 WASHINGTON — Six years after Hurricane Katrina, a relative of Mississippi Gov. Haley Barbour was found by a federal court to have masterminded a massive fraud against the Federal Emergency Management Agency in the inspection of the legendary trailers that housed storm refugees along the Gulf Coast.

She was ordered to pay more than $350,000 in penalties and damages. In often colorful language, the judge described the testimony of Rosemary Barbour during an eight-day trial in May in Jackson as “exasperating” and “bumble-headed.”

“PASS CHRISTIAN, Miss., Dec. 6 – Rosemary Barbour happens to be married to a nephew of Mississippi’s governor, Haley Barbour. Since the Reagan administration, when Mrs. Barbour worked as a White House volunteer as a college student, she has been active in the Republican Party.

She also happens to be one of the biggest Mississippi-based winners of federal contracts for Hurricane Katrina recovery efforts.

To some contract watchdogs, this could be an example of how the federal government responsibly reached out to give a piece of the billions of dollars in federal hurricane-recovery work to a small Mississippi-based company owned by a Latina. Mrs. Barbour, 39, who was born in Guatemala but now lives in Jackson, Miss., is certified by the United States Small Business Administration as a disadvantaged small-business owner.”

This is interesting, don’t you think?

Alcatec qualified as a minority-owned firm during the bid process. Barbour, an American citizen and active in Republican politics, was born in Guatemala. She said she used her maiden name, Ramirez, when she made the bids, so that federal officials would not know of her family ties.”

How can a graduate of Westover and Goucher who worked in the Bush 41 administration and married into a powerful political family at age 24 be legitimately certified as “disadvantaged?” Even if she was born in Guatemala?

The more I think about it, the more it seems to me that her story about using her maiden name might be just that–a story, to try to throw us rubes off the nepotism/cronyism trail. I’m sure she probably is registered with the SBA as a disadvantaged minority and actually did fill out the paperwork with her maiden name, but that’s likely only because one of Haley’s or her own old Washington buddies or friends of friends helped her cook up that cover story…when they found out that she was born in Guatemala and her maiden name is Ramirez, a Latina/minority/disadvantaged-sounding name if there ever was one…

5 thoughts on “All in the family”