At the Occupy St. Pete protest held yesterday in one of Florida’s more liberal cities, almost 400 people turned out to the first Occupy event. They had their stories about why they were there, and what they hoped to accomplish.

Ogini Montaya, a tall skinny guy with a painted face, shook his head. “Yeah, I should have read the fine print,” the 30-year-old electrician said. But when the work dried up along with the housing boom, it seemed like a good idea to go back to school.

Unfortunately for the husband and father of two, he chose a trade school whose counselor a/k/a sales rep assured him any credits earned at the school would transfer to a local college. “I even got it in writing,” he told me, rueful. “They lied to me, dead to my face.

Austin Mann, 60, has lived in St. Pete for 22 years. “These people who make money getting bailed out by the government when they ran it into the ground – in my business career, if I messed up, I got fired and I certainly didn’t get a bonus,” he said.

He says he used to own a large nursery in Tampa, but the opening of a Home Depot hurt his business. “After Lowe’s opened, too, it was a death knell,” he said. 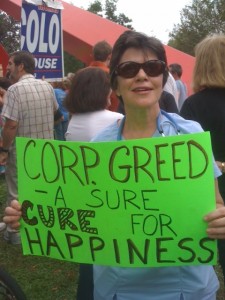 I spotted Christine Langlois, 59, a nurse in scrubs and carrying a sign proclaiming “Corporate Greed – A sure cure for happiness.” The Bradenton resident said she turned out to show her support for everyone “feeling the pinch of the economy and corporate greed.”

She said she was making the same amount of money she made in 1998 “and I can’t save.”

Langlois left nursing for a more lucrative career in business, but returned to nursing after the economy crashed. “I’d kept up my license. At least I could get a job,” she said. She’s supposed to be a full-time hospital employee, but says last week they called her and told her not to come in for her usual 12-hour shift. “How am I supposed to pay my bills when I don’t know from one week to the next how many hours I’ll work?” she said. “The people at the top are getting all the money, and the 99% aren’t seeing it.” 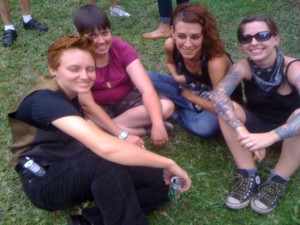 Another healthcare worker, Jennifer Romanelli, was there because she was “tired of being lied to by the people who are supposed to represent us.” The 28-year-old said she was for the “solidarity” and hoped the Occupy movement could make things mutually beneficial “for everyone, not just those people who are controlling the pursestrings.”

Ricki Bloom, a 29-year-old social worker, was skeptical. “I want to see if we can get some goals,” she said. “I’m wondering if we’re just protesting, or if people will get something done.” Her friend Cat Smith, 28, had more immediate concerns. “I work in a health food store, serving the bourgeoisie,” she said. “I don’t have health care, and I can’t make ends meet. I’m here to support any solutions.”

Another friend, Courtney Rowles, 24, works in a halfway house. “I’m here to check out the scene, see what actions and long-term goals they come up with,” she said.

“It’s a shame it had to wait until the privileged classes had to feel the consequences of what capitalism and Wall Street has always been doing to everyone else.”