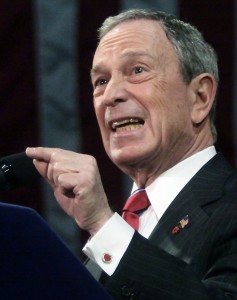 If there was any doubt in your mind to just how indifferent the 1% is to the needs of the 99%, or whether Bloomberg sees Occupy Wall Street only as a mere nuisance, I think this news will clear that right up:

New York Mayor Michael Bloomberg will host an intimate dinner at Gracie Mansion on Sunday night that brings together a bipartisan group of senators, Xerox chief executive Ursula Burns and other business and labor leaders to discuss how to pave the way for the Super Committee to “go big” and cut $4 trillion in federal spending, according to a source familiar with the dinner.

The Washington contingent includes Democratic Sens. Michael Bennet and Mark Warner and Republican Sens. Bob Corker, and Saxby Chambliss, among others. The meeting will be a much smaller, more strategic affair — 10 to 20 people — than a similar dinner Warner threw at his home in September, which had a guest list of 60.

Sunday’s dinner is another in a series of conversations that lawmakers, policy makers and business and labor leaders have been having since last summer to make a business case for big cuts in spending. A number of senators and business groups, including the Business Roundtable and U.S. Chamber of Commerce, having been urging the Super Committee to cut more than the $1.5 trillion it is charged with finding.

But Occupy Gracie will be there with a message of their own:

To eliminate the budget deficit, the SuperCommittee could simply tax the top 1% through a Millionaires Tax and a Robin Hood Tax on Wall Street speculation.

But instead they plan to slash Medicare, Medicaid, Social Security, and everything else essential to the survival of the 99%.

Their joyful champagne toast will be “Let them eat cake!”

Naturally, the 99% were not invited to dine with the 1% at Gracie Mansion. So we’ll just have to @OccupyGracie.

Come dressed as Marie Antoinette, Louis XVI, or a Peasant – and bring the family. We’ll vote for the best costumes and they will serve us all cake!

One thought on “Bloomberg to Super Committee: Let them eat cake”