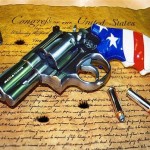 That wacky, crazy Wayne LaPierre, CEO of the National Rifle Association (“We Sell Fear”©) is gearing up for the election year fundraising blitz. Imagine, if you will, President Barack Obama carrying out a full-scale national crackdown on guns. Now that you’re done laughing, read just what paranoid flames Wayne is willing to fan to keep his million-dollar paycheck:

Neutralize gun owners and NRA members as a political force in the upcoming national election by pretending to be pro-gun or at least not focused on pushing a gun-control agenda;

With gun owners neutralized, Obama will be able to win the election. After the president is re-elected, he won’t have to answer to voters because he won’t have to face another re-election battle;

Launch a full-scale, all-out assault to rip the Second Amendment out of the Bill of Rights through legislation, litigation, regulation, executive orders and international treaties — in short, every lever of power at the administration’s disposal.

Barack Obama spent his entire political career proudly and publicly pushing for the most radical anti-gun positions you can imagine. He endorsed a total ban on the manufacture, sale and possession of handguns. He opposed right-to-carry laws. He voted to ban nearly all commonly used hunting-rifle ammunition.

During the presidential primary debates, Obama even vowed to re-impose the discredited Clinton gun ban, which banned many commonly owned firearms used for hunting and self-defense.

Obama hasn’t had a sudden change of heart; rather, he’s making a purely political calculation by staying quiet on the gun issue until the time is right. In the meantime, he’s gearing up for his second-term assault on the Second Amendment in a number of ways.

Hah! It’s more than a tad ironic that the CEO of the NRA is selling the same line Obama true believers do: “He’s keeping his powder dry! Just wait until his second term!” The truth is, the president has shown no interest in actually doing anything to control guns, although he occasionally offers tepid verbal support, like after Gabby Gifford’s shooting.

But the NRA hasn’t lived in the fact-based world for several decades now. Richard Feldman, former NRA lobbyist, is a public affairs lawyer who wrote “Ricochet: Confessions of a Gun Lobbyist”. He points out that the name of the game for NRA leadership is keeping themselves highly compensated:

In 1997, after I’d left the NRA, I was running a legislative trade association for the firearms industry (Colt, Glock, Remington et al.). That’s when I did the unforgivable, at least in the NRA’s eyes: I found a workable solution to the problematic issue of child-safety locks on guns.

I shortstopped proposed gun-lock legislation predicted to be another slam dunk for the anti-gun movement by offering an option that made everyone happy. Well, almost everyone. In the White House Rose Garden — standing before the NRA’s bete noire, President Bill Clinton — I announced that the firearms industry was instituting a voluntary program to include a gun lock with every handgun sold. As the television news cameras rolled, Clinton announced that he was satisfied and that no mandatory gun-lock law was needed. But NRA commanders were up in arms. They denounced me as a traitor to the sacred cause of the Second Amendment. Compromise was not good for fundraising, the NRA’s lifeblood.

H arlon B. Carter, who created the modern NRA in the 1970s, earned about $70,000 a year (about $200,000 in today’s dollars) as executive vice president and was driven to meetings in the company Chevrolet. Wayne LaPierre, who currently sits upon the executive vice president throne, pocketed about $950,000 in 2005. The parking lot at the association’s twin-glass-towered headquarters off Interstate 66 in Virginia is filled with shiny new BMWs and Mercedes-Benzes.

What’s unseemly about the stratospheric six-figure salaries flowing into NRA leadership wallets is that the cash comes from hundreds of thousands of members who are hard pressed to write $35 annual membership renewal checks or send an extra $10 or $20 to the NRA Political Victory Fund to protect their guns.

Then there’s the question of the millions paid to outside lobbyists (including an ex-employee and personal friend of LaPierre’s). And the millions more doled out to LaPierre’s friends at the Mercury Group ad agency. Who knows how much cash, thanks to the NRA, has found its way to the company that arranges the association’s travel tours, allows members to buy a home through NRA real estate brokers, finance it via an NRA mortgage, save with NRA banking services, take out NRA insurance, get laser eye surgery and shoes resoled by an NRA-affiliated vendor, then pay for everything with an NRA credit card. The association claims it was only coincidence, but LaPierre’s wife happened to be the vice president for marketing for the firm that set up that bonanza of member-discount services.

The media and anti-gun politicians make a mistake by engaging with the NRA, penning inflammatory headlines, threatening to crush the organization and salt the earth beneath its headquarters. They are just reminding the NRA faithful that they’re surrounded by enemies who threaten to batter down their doors and snatch their firearms. And all it results in is the constant “ka-ching” of cash rolling into NRA coffers.

If the threat to honest citizens’ right to own firearms ever dipped below the radar, so too would the association’s political might. That’s why the NRA leadership will never tolerate the give-and-take that makes up real problem-solving. It would be bad for business.

And what have we learned, class? Don’t expect the truth from a man whose paychecks depend on a lie.