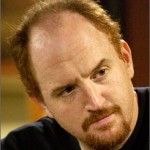 But even more since he did this:

(NEWSER) – Comedian Louis CK has scored nice profits by taping, producing, and distributing his stand-up special by himself and without the help of a network or studio. In what he calls an “experiment” to cut out the middlemen and keep prices low, CK hired a camera team to tape two of his stand-up performances at the Beacon Theater in Manhattan. He then began selling the video for $5 a pop on a newly built website, and after merely four days had racked up 110,000 downloads and $200,000 in profits, reports Mashable.

He notes on the site:

The show went on sale at noon on Saturday, December 10th. 12 hours later, we had over 50,000 purchases and had earned $250,000, breaking even on the cost of production and website. As of today, we’ve sold over 110,000 copies for a total of over $500,000. Minus some money for PayPal charges etc, I have a profit around $200,000 (after taxes $75.58). This is less than I would have been paid by a large company to simply perform the show and let them sell it to you, but they would have charged you about $20 for the video. They would have given you an encrypted and regionally restricted video of limited value, and they would have owned your private information for their own use. They would have withheld international availability indefinitely. This way, you only paid $5, you can use the video any way you want, and you can watch it in Dublin, whatever the city is in Belgium, or Dubai. I got paid nice, and I still own the video (as do you). You never have to join anything, and you never have to hear from us again.

I really hope people keep buying it a lot, so I can have shitloads of money, but at this point I think we can safely say that the experiment really worked. If anybody stole it, it wasn’t many of you. Pretty much everybody bought it. And so now we all get to know that about people and stuff. I’m really glad I put this out here this way and I’ll certainly do it again. If the trend continues with sales on this video, my goal is that i can reach the point where when I sell anything, be it videos, CDs or tickets to my tours, I’ll do it here and I’ll continue to follow the model of keeping my price as far down as possible, not overmarketing to you, keeping as few people between you and me as possible in the transaction.

2 thoughts on “I heart Louis CK”