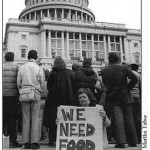 That’s half, folks. Half of all Americans. So it ain’t just you.

Squeezed by rising living costs, a record number of Americans — nearly 1 in 2 — have fallen into poverty or are scraping by on earnings that classify them as low income.

The latest census data depict a middle class that’s shrinking as unemployment stays high and the government’s safety net frays. The new numbers follow years of stagnating wages for the middle class that have hurt millions of workers and families.

“Safety net programs such as food stamps and tax credits kept poverty from rising even higher in 2010, but for many low-income families with work-related and medical expenses, they are considered too ‘rich’ to qualify,” said Sheldon Danziger, a University of Michigan public policy professor who specializes in poverty.
“The reality is that prospects for the poor and the near poor are dismal,” he said. “If Congress and the states make further cuts, we can expect the number of poor and low-income families to rise for the next several years.”

Congressional Republicans and Democrats are sparring over legislation that would renew a Social Security payroll tax reduction, part of a year-end political showdown over economic priorities that could also trim unemployment benefits, freeze federal pay and reduce entitlement spending.

And in case you think establishment conservatives are unsympathetic to your plight, they are.

Robert Rector, a senior research fellow at the conservative Heritage Foundation, questioned whether some people classified as poor or low-income actually suffer material hardship. He said that while safety-net programs have helped many Americans, they have gone too far. He said some people described as poor live in decent-size homes, drive cars and own wide-screen TVs.

What? Some poor people still have cars they aren’t living in? So much more work to do, eh Robbie?

In the meantime, you poor folk should stop complaining and watch that big-screen TV.

UPDATE: I have been kicking this story around in my head for a little while and I wondered why a quote from a Heritage Foundation douchebag is even in the story. I went back to the story and saw no corresponding quote from an advocate for the poor. The closest thing was the quote, included in the snippet above, from Sheldon Danziger, the poverty expert from the University of Michigan. Being an expert in poverty doesn’t necessarily mean he is an advocate for the poor, although he may be. It just means he knows what he is talking about.

It’s just another example of the MSM’s fetish with the bullshit idea of “balance,” which in this case apparently means that if you report that nearly half of all Americans are impoverished or low income, you have to find some asshole willing to say that poverty isn’t so bad.

I guess the next time the AP reports on a rape, it will have to find someone to say that rape isn’t so bad. You know, for balance.

Hey, if you are a reporter writing about a rape and need that “rape isn’t so bad” quote to ensure complete, balanced reportage, try this guy. One caveat: The victim has to be Latino.

View all posts by Dr. S.