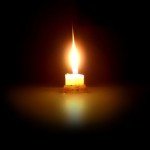 Written more than 20 years ago.

CHRISTMAS WAS COMING but I saw only darkness ahead: My husband and I were getting a divorce and we planned to tell the kids after the holidays. With that hanging over me, I wandered through Macy’s, trying in vain to focus on shopping.

But my nerves were too raw. When a tuxedoed pianist stationed by the jewelry counter started to play a gorgeous, jazzy version of “Have Yourself A Merry Little Christmas,” I began to cry. Because I knew I wouldn’t have a merry little Christmas and wasn’t sure I ever would again.

A few days later, I took my sons to see “An American Tail.” I figured talking mice were safe enough, but when Fievel the Mouse began singing “Somewhere Out There,” the tears returned. “It’s such a hokey song. Why are you crying?,” I silently scolded myself. I had so little compassion for my own pain that swallowing was a difficult habit to break. I was breaking up my family; who was I to feel entitled to cry about anything?

I was crying because the song was about someone out there looking at the same bright star and waiting just for you. It was an enormous lie, I knew. I was walking away from the officially-sanctioned structure of family for no other reason than my own crushing loneliness. What made me think that the way to cure my unhappiness was to turn it up several notches and spread it to the people I loved? My punishment, I knew, was that no one would ever love me again. I cried quietly in the dark while the screen light flickered over the still-innocent faces of my boys.

Such a dark time of the soul, that particular season. But while driving home from work, shivering in my old Dodge Dart, I’d find myself lost in wonder at the Christmas displays. Instead of the garish excess I’d so readily ridiculed before, I saw a sign of better times to come. I could take it only on faith because by any logical measure, my world seemed hopeless. “Light in darkness,” I repeated to myself. “Light in darkness.”

I attended Midnight Mass back in the inner-city neighborhood where we lived in the early years of our marriage. St. Francis de Sales evolved from a turn-of-the century working-class Irish parish to its present-day mix of now-elderly Irish parishioners, Vietnamese immigrants, academics and students from the nearby University of Pennsylvania and a growing base of black Catholics.

At Christmas, many cultural Catholics like me were happy to throw the annual $20 bill in the collection basket — we’d turned our backs on the institutional church, but were still drawn to the majesty of this day. It’s hard, after all, for someone who entered so many “Keep Christ in Christmas” poster contests to imagine Christmas without church.

The carol service preceded the Mass. People filed into the enormous church, which was lit only by a few scattered wall sconces and the tiny yellow lights on the altar’s evergreen trees. The organist played quietly while we sang about a tiny baby who was called Light of the World. “Come, oh come, Emmanuel and rescue captive Israel.” We sang about shepherds and a dark, cold night when wise men followed a star.

Every year, they follow the same satisfying ritual. The bright lights of the old domed church blaze on, precisely as the French pipe organ swells to the rafters and the brass ensemble joins in. The choir sings out “Joy to the World” and the priests and altar attendants, boys and girls, despite our ultra-conservative cardinal’s prohibition, march happily toward the altar, greeting friends, family and parishioners. For that moment, the paralyzing fear is gone and we all love each other.

When the priest reads the familiar story, “Fear not, for behold, I bring you glad tidings of great joy which shall be to all people,” I choke up. That year, I held onto the words tightly because I was suddenly so afraid of so many things. “Fear not,” I told myself fiercely. “Fear not.”

I made it through that year, and then another, until more than a decade has passed. My sons are grown men with productive lives and yes, someone did love me again. But I’m even more heartened that I finally learned how to love.

How appropriate that this darkest season is also the season of light shining through darkness. Whatever faith we follow, or avoid, light is the theme woven through our winters. It’s a star that leads wise men to the Light of the World, a flame that burns eight days without oil against all reason. It’s a blazing Solstice bonfire on a cold, dark night. It’s the sneaking suspicion and humble hope that maybe the universe is on our side, whether we deserve it or not. Joy — yes, to the world. To all people.

Mine can’t be the only heart that leaps when Scrooge awakens from his long winter sleep, determined to bring light and warmth to the Cratchit family. Who doesn’t cheer the possibility of transformation, for ourselves and everyone else?

We all have a small, doubting child inside, like Natalie Wood in “Miracle on 34th Street.” I can’t tell you how often I mutter to myself, “I do believe in Santa Claus. I do.” No matter how convinced I am he’s just a nice old man with a beard. Oddly enough, I’ve learned, just like that other Susan, that the more purely and deeply I believe, the more miracles seem to rain from the sky.

Through what filter do we chose to see this modern world? The annual barrage of Christmas symbols is either the most cynical of capitalist propaganda – or it’s the mythology of our time.

Those myths light our way through the darkness. They’re about hope, love and acceptance. They celebrate what we have in common instead of what drives us apart. Why do we still watch Rudolph the Red-Nosed Reindeer and root for Herbie, the elf who longs to be a dentist? Who doesn’t secretly feel like a candidate for the Island of Misfit Toys? And why do we still anticipate the moment Linus looks at Charlie Brown’s little Christmas tree with its tinkling needles and says, “You know, it really isn’t such a bad little tree.”

You demand angst instead of all this saccharine? Well, then: Whose existential pain doesn’t resonate with George Bailey, the bitter anti-hero of “It’s A Wonderful Life”? We sorely need this annual fable to balance the weight of our own cynicism. We do make a difference. We do touch other people, we change their lives with each act of caring. Think of it as quantum physics if it makes you feel more sensible. Our presence has meaning, on even the smallest scale.

That’s the real light in the darkness, after all. How do we sustain a sense of meaning without that hope? How can we even bear to board an airplane these days if we don’t also carry the comforting thought of potential heroes among us?

It’s how we know every time a bell rings, another angel gets his wings. We trust the lamp to burn long enough to see us through this latest siege, and we know the Ghosts of Christmas Past, Present and Future can change even the hardest hearts overnight. Deep down, we know the act of believing in Santa is the real point – not something as unimaginative as proving he’s not “real.” And we pity the Grinches who don’t understand Christmas is what’s in our hearts, not what’s under the tree.

“Don’t get your hopes up.” What a cowardly, cautious thing to say. When you live in fear and doubt, you get exactly the world you see. The season of lights is the reprieve we get from that arrogant faith in our own reasoning. Against all odds, despite everything the world presents to convince us it’s a horrible place, we seem to be hard-wired for hope.

This is the season we let our hearts out to play. Fear not!

10 thoughts on “The season of lights”