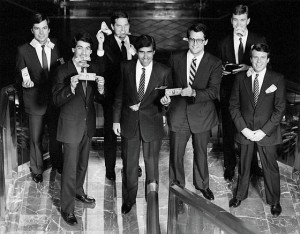 Where does he get the energy? Charlie Pierce, as usual, continues to be The Man:

Willard Romney has never known a day of peril in his life. He grew up with a silver spoon lodged so deeply in his gums that he had his baby teeth until he was 25. He did his Mormon mission in Provence, for the love of god. He moved onto a lucrative career in predatory capital. If, as was said, George W. Bush was born on third base and thought he hit a triple, then Willard Romney was born in the dugout with four runs in, nobody out, and the bases loaded.

Comes now this pure piece of manufactured product, this vacant replicant of American plutocracy, to lecture a country in the middle of a fragile recovery from an economic disaster brought on by the other soulless replicants on the topics of our vanishing work ethic, and the great moral cleansing power of onrushing poverty. And, because he cares less about the country he’s planning to lead than he does about the next nickel he can squeeze out of it, he’s doing so with rhetoric that owes more to George Wallace than it does to George Romney, who was a decent Republican in the days before greasy-beaked vultures like his spalpeen hijacked the party. (Which is pretty much what E.J. Dionne was saying recently.)

Willard is working the old poor-people-are-robbing-you-blind melodeon again while his real targets are anyone who receives any kind of federal government assistance of any kind whatsoever. And don’t fall for the old “states do it better” dodge. Willard knows full good and well that the states can’t carry this kind of load, either, and that the costs will just get passed down to lower and lower levels of government until nobody can pay for anything, and the programs that he’d like to see eliminated because it will help him get elected simply disappear.

He is the real austerity candidate, the guy who will run the ball here for the banksters who are crippling Europe, and a lot of Europeans, with economic strategies that keep themselves afloat while children die of preventable diseases, and guaranteeing that whatever recoveries there will be in places like Ireland and the UK will be the sole property of the people who most deserve them. This is what Willard Romney would like to bring to America. He just has to convince enough people that the pain will be imposed upon the undeserving Them. It is a vicious puppet show of a campaign he’s running.

He is really the only true class warrior in the race. He’s counting on prejudice and ignorance because he is running in the Republican primaries and that’s the coin of the realm. But he’s also counting on the desperate dreams of desperate people who want to believe that there is a big bag of money out there that’s going to the Wrong People, and that, if someone would only re-direct it, their lives would be better. Well, there is a big bag of money out there, and it is indeed going to the Wrong People, and those would be the people in whose company Willard Romney has spent his entire, cosseted, entitled existence. He has embarked on a divisive campaign of misdirection, hoping against hope that nobody notices that he mortgaged himself to his ambition on an adjustable rate, and that he’s underwater on his soul.

13 thoughts on “The entitlement society”