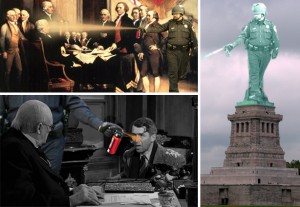 In their annual list of the nation’s most overlooked stories, the editors of The New Republic shrewdly dug up a column by Walter Shapiro in which Shapiro pointed out that President Obama’s fireside chat on the economy back on July 25 marked a turning point in our national conversation about what was done to our economy over the previous decade. The speech was a dead-assed appeal for a “balanced” approach to reducing the deficit:

Now, I realize that a lot of the new members of Congress and I don’t see eye-to-eye on many issues. But we were each elected by some of the same Americans for some of the same reasons. Yes, many want government to start living within its means. And many are fed up with a system in which the deck seems stacked against middle-class Americans in favor of the wealthiest few. But do you know what people are fed up with most of all? They’re fed up with a town where compromise has become a dirty word. They work all day long, many of them scraping by, just to put food on the table. And when these Americans come home at night, bone-tired, and turn on the news, all they see is the same partisan three-ring circus here in Washington. They see leaders who can’t seem to come together and do what it takes to make life just a little bit better for ordinary Americans. They’re offended by that. And they should be.

There is so much wrong with that. The tired “government should live within its means” trope, as though John Maynard Keynes had died as a child. The deflection of perfectly legitimate, class-based anger at the thieves and sharpers who stole the national wealth into a mushy criticism of generalized government dysfunction. What’s the takeaway here? That people can’t imagine government making their personal economies better, but are ready at all times to believe that it can make their personal economies worse? Ronald Reagan couldn’t have said it better. Walter Shapiro is right: This was a moment, and the president’s response to it was positively tone-deaf. Yes, I know, you campaign in poetry and you govern in prose. But there are all kinds of prose. A feed catalogue is prose, but so is Moby-Dick. Calvin Coolidge spoke in prose, but so did FDR. And, of course, we must never make the perfect the enemy of the good. But you know what else is the enemy of good? Timidity is the enemy of the good. Cruelty is the enemy of the good, and so are selfishness, bigotry, and ignorance. Why perfection is the only enemy of the good that ever seems worth fighting is a good question with which to launch the new year.

It is a dead-level time for us as a people. There are now 146 million Americans who are ranked as “low-income” or “poor.” Somebody really should do something about that. How we treat them in our politics is going to be the ultimate test of our moral credibility as a nation. Do we treat this situation as the national disgrace that it is, and commit ourselves as a nation to eliminating it? Or do we turn away from them, blame them for the malaise we feel in our lives, and drink deeply again from the supply-side, trickle-down snake oil? Do we look at the president — a Democratic president — and scream that this is no longer tolerable to us as a people? Or do we nod sagely and deplore the lack of civility and bipartisan cooperation in our government and hope that cooler heads will prevail, that the great national purpose of our age is to deprive ourselves further of what was supposed to be the promise of the country in the vague and futile hope that somehow, somewhere, things will get better down the line?