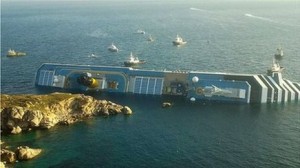 A massive cruise ship hit rocks off the coast of Italy and ran aground:

Emergency teams in Italy are racing to rescue those missing after a cruise ship ran aground off the country’s west coast with about 4,000 people on board.

Coast guard vessels are combing the waters around the Costa Concordia, which is lying on its side. Divers are searching its submerged decks.

There were scenes of panic as it began listing on Friday. Most people reached land by lifeboats but some swam ashore.

Three people are confirmed dead. About 70 are said to be unaccounted for.

However, local official Giuseppe Linardi told reporters that some of those listed as missing may still be housed in private homes on the small island of Giglio – where those rescued reached land.

A large gash can be seen in the hull of the luxury liner as it lies on its side, about 200m from Giglio.

Italian, German, French and British nationals were among the 3,200 passengers on board. There were also 1,000 crew.

Some passengers were rescued by lifeboat, helicopters plucked to safety some who were trapped on the ship, and others jumped from the ship into the cold sea.

Some of the survivors are suffering from shock. About 40 people are being treated in hospital.