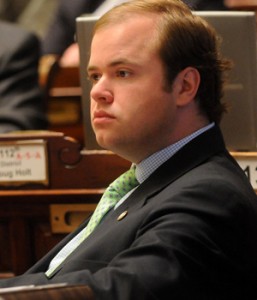 Old Kip-a-rooney is just one in a long, dishonorable line of Republican hypocrites who want to harass the poor for the crimes of which they themselves are guilty. Rep. Kip Smith is one of the sponsors of HB 464, which would require random welfare recipients in Georgia to be drug tested. (By the way, his father is DOT Commissioner and former state lawmaker Vance Smith, so you know he made it the hard way.)

It’s comical, how predictable this was, huh? From the Atlanta Journal-Constitution:

Smith, a 29-year-old lawmaker from Columbus, was pulled over after leaving Hal’s restaurant on Old Ivy Road and allegedly running a red light while traveling southbound on Peachtree Road, the police report said.

Kramer said he informed Smith, who was traveling alone, why he was stopped, and the lawmaker told him he didn’t realize the light was red.

“I observed the odor of an alcoholic beverage coming from Mr. Smith’s breath,” Kramer said in his report. “He advised me he was a state representative and gave the name ‘Kip Smith.’”

Smith, whose given name is John Andrew Smith, first told the officer he had not consumed any alcoholic beverages.

“I asked him again, and he stated he had consumed a single beer at Hal’s. I noticed also that Mr. Smith’s eyes were watery, and I asked him to exit the vehicle, which he did,” Kramer said in the report.

Smith told the officer he’d had the beer 45 minutes earlier, and the officer asked him to blow into a hand-held “intoximeter”. The officer said the lawmaker refused, stating he would prefer to go to a clinic or the hospital to get tested.

The officer told Smith that was done only after an arrest, and that Smith had not been placed under arrest, but Smith “seemed to be having a difficult time understanding what I was trying to explain to him,” the officer said in the report.

The officer said Smith finally agreed to blow into the device. The report stated that Smith blew a .091., which is above the legal limit of .08.

7 thoughts on “Another hypocritical Republican gets arrested”