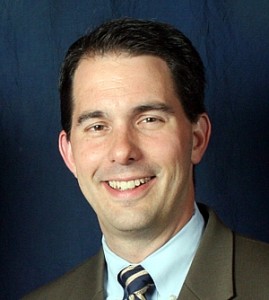 When you read this sort of thing, you might get the impression that Wisconsin Gov. Scott Walker is little more than a corrupt political hack. Because really, the fact that his employees set up their own intranet to communicate on campaign work would indicate that someone higher up the food chain directed them to do so, and that a culture of corruption was pervasive on his staff. But since we all “know” Scott is really a God-fearing man, there must be some other explanation, right?

Two staffers who worked directly for Gov. Scott Walker while he was county executive were charged Thursday with illegally doing extensive political work while being paid by taxpayers to do county jobs.

One of the two, Darlene Wink, cut a deal with prosecutors under which she agreed to provide information in a related investigation about the destruction of digital evidence and to aid in further prosecutions. This is the first indication that the multifaceted John Doe investigation may be pursuing charges of evidence tampering.

Milwaukee County prosecutors also made the surprising disclosure that top Walker aides set up a private Internet network to allow them to communicate with one another by email about campaign as well as county government work without the public or co-workers’ knowledge.

The emails Walker officials traded via the shadow network could provide investigators with a trove of information as they pursue other angles in the case. Earlier this week, the Journal Sentinel reported that the probe was focusing on possible bid-rigging and other misconduct in the competition to house the county Department on Aging in private office space.

In a statement, Walker’s campaign said he had a policy against county employees using government resources to do campaign work.

“Scott Walker expected everyone to follow the law and made that clear publicly and privately,” the statement said.

There, you see? He had a “policy” against it, so I’m sure everything’s going to be just fine for Scott!

On Thursday, prosecutors charged Kelly Rindfleisch, deputy chief of staff to Walker in 2010, with four felony counts of misconduct in office for working for then-Rep. Brett Davis’ 2010 campaign for lieutenant governor while on the county clock. Davis, who lost in the Republican primary, is now Walker’s state Medicaid director.

The complaint says that Rindfleisch told a friend in an Internet chat shortly after taking the job with Walker that “half of what I’m doing is policy for the campaign.”