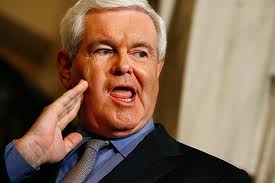 Now, I’m going to assume that you didn’t come in during the third act of Newt’s career, and therefore you can appreciate just how funny it is when, on This Week, he’s whining to Jake Tapper about how hard it is to pin someone down who will just lie about anything!

TAPPER: In many ways, you are where you are because of your debate performances. Last week, you had a couple that were not your strongest, to say the least.

TAPPER: Why do you think that was? What happened?

GINGRICH: I was amazed. I mean, I’m standing next to a guy who is the most blatantly dishonest answers I can remember in any presidential race in — in my lifetime. And I’ve seen, I think, every presidential debate — presidential campaign debate or virtually every one. And, you know, he would say things that were just plain not true.

And I had — I don’t know how you debate a person with civility if they’re prepared to say things that are just plain factually false. And that’s going to become a key part of this. I think the Republican establishment believes it’s OK to say and do virtually anything to stop a genuine insurgency from winning because they are very afraid of losing control of the old order.

TAPPER: I want to follow up on some of these comments you’re making about Mitt Romney. The race has taken something of a nasty turn. Here’s an ad that you are currently running in Florida.

(UNKNOWN): What kind of man would mislead, distort and deceive just to win an election? This man would, Mitt Romney. If we can’t trust what Mitt Romney says about his own record, how can we trust him on anything?

TAPPER: It sounds as if you’re saying in that ad, and here this morning, that Mitt Romney is unfit and does not have the character to be president.

GINGRICH: I am saying that he would not be where he is today, the debates this week wouldn’t have been where they were, if he had told the truth. And I think that’s a very serious problem for somebody. I think that you look at — again, he’s supposedly a great manager, yet he can’t explain 23 different foreign accounts that weren’t reported. He’s a great manager. He can’t explain being on the board of directors of the company which got the largest Medicare fine in history for fraud?

Every time you turn around, this great manager consistently doesn’t understand whatever it is that would have hurt him. And you just have to look back and say, why can’t you be candid with the American people? You cannot be president of the United States if you cannot be honest and candid with the American people. And that’s compounded, frankly, by a number of the ads he runs, which are just plain false.

TAPPER: So you’re saying that he does not have the character to be president of the United States, because he’s, in your view, not honest.

GINGRICH: I’m saying it is a very — it’s a — it is a very serious problem when you have somebody who on item after item after item — I mean, the clip you had just now, he knows what he said in that clip is not true. I did not resign in disgrace. I did not pay a fine. And, in fact, CNN ran an entire piece recently in which they pointed out that on every single substantive count in the ethics investigation, every single one, that I was vindicated, including vindication by a federal judge, vindication by the Internal Revenue Service, vindication by the Federal Elections Commission. Now, Romney knows that.

TAPPER: Well, the clip — the clip…

GINGRICH: So he’s run a campaign of vilification.

TAPPER: The clip I just played was actually one of your ads, but let’s get to that Romney ad that you’re talking about…

GINGRICH: What he said yesterday, this wasn’t true.

And if you’ll notice, when you get outside the zone where Romney carpet-bombs with Wall Street money, and you look at what’s happening in the rest of the country, I’m ahead in all three national polls that were released this week. I’m ahead by a big margin, because when you come to positive ideas, I represent real change in Washington, I represent unleashing the spirit of the American people to get us back as a country, rebuilding the country we love. And when we get to a positive idea campaign, I consistently win.

It’s only when he can mass money to focus on carpet-bombing with negative ads that he gains any traction at all.