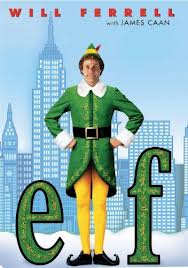 Make of it what you will, but I’ll start by saying that if you don’t like “Elf,” we probably wouldn’t be friends in real life. “Elf” is the delightful Christmas tale of an unusually tall elf from Santa’s workshop who finds out he was adopted, and journeys to New York to find his real father.

And even if you hate Will Ferrell (some people do), he’s just so perfect in this as Buddy, the elf on a mission. He’s beautifully naive and loving, and there’s not a false note in his portrayal. And the story’s about family, and how hard it is when you don’t quite fit in, and finally opening your heart to hope and joy. Who can’t relate to that?

James Caan is his father. He doesn’t believe he’s Buddy’s father, but his wife (Mary Steenburgen) convinces him to take Buddy into their family. Zooey Deschanel is also her charming self as the Macy’s elf Buddy meets and with whom he falls in love. (Let’s just say they have the first date to end all first dates.) If you’re a fan of “Game of Thrones,” there’s also a hysterical scene with Peter Dinklage in which Buddy mistakes him for another elf.

And of course there’s a happy ending.