And I mean that in the most complimentary sense:

Last month, my friend Ham Rove passed away in a very unsuspicious fashion. On the same day, Colbert Super PAC’s money, $773,704.83, was squirreled away in a fashion that was extremely suspicious, but entirely legal. I thought that’s the last I’d hear from Ham Rove, particularly because a dog ate him.

But Ham Rove had plans beyond his death, and I was recently surprised to find myself on the board of the Ham Rove Memorial Foundation. I was equally surprised to learn we received a $773,704.83 donation. Where did that very specific amount of money come from? There’s simply no way to know. 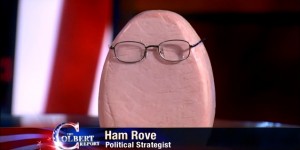 Tonight, I am honored to announce First and Final Annual Charitable Donations by the Ham Rove Memorial Fund.

Hurricane Sandy was much like Ham Rove: Cold, cruel, salty, and the cause of untold devastation. In his honor, Donors Choose, Team Rubicon, and Habitat For Humanity will each receive $125,000 to assist with their Sandy relief efforts.

The remaining money will be split between two pro-transparency groups who fight against the corrupting influence of outside money in politics. Luckily, they were both fine with the corrupting influence of outside money in their offices. As per his wishes, the Center for Responsive Politics has officially renamed their meeting space “The Colbert Super Pac Memorial Conference Room.” And the Campaign Legal Center will, from here on out, be home to “The Ham Rove Memorial Conference Room.”

It is the highest compliment that I can pay when I say I miss Ham Rove almost as much as I miss that money. I wish he could have stayed with us a little longer. Because now I have to plan a whole new Christmas dinner.

One thought on “Stephen Colbert is a good Catholic boy”