Krugman on what the plutocrats want next: adulation!

Sometimes, in fact, members of the 0.01 percent are explicit about their sense of entitlement. It was kind of refreshing, in a way, when Charles Munger, the billionaire vice chairman of Berkshire Hathaway, declared that we should “thank God” for the bailout of Wall Street, but that ordinary Americans in financial distress should just “suck it in and cope.” Incidentally, in another interview — conducted at his seaside villa in Dubrovnik, Croatia — Mr. Benmosche declared that the retirement age should go up to 70 or even 80. 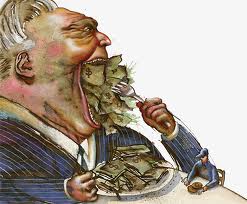 The thing is, by and large, the wealthy have gotten their wish. Wall Street was bailed out, while workers and homeowners weren’t. Our so-called recovery has done nothing much for ordinary workers, but incomes at the top have soared, with almost all the gains from 2009 to 2012 going to the top 1 percent, and almost a third going to the top 0.01 percent — that is, people with incomes over $10 million.

So why the anger? Why the whining? And bear in mind that claims that the wealthy are being persecuted aren’t just coming from a few loudmouths. They’ve been all over the op-ed pages and were, in fact, a central theme of the Romney campaign last year.

Well, I have a theory. When you have that much money, what is it you’re trying to buy by making even more? You already have the multiple big houses, the servants, the private jet. What you really want now is adulation; you want the world to bow before your success. And so the thought that people in the media, in Congress and even in the White House are saying critical things about people like you drives you wild.

It is, of course, incredibly petty. But money brings power, and thanks to surging inequality, these petty people have a lot of money. So their whining, their anger that they don’t receive universal deference, can have real political consequences. Fear the wrath of the .01 percent!

You see this with just about every compulsive behavior. If you’re not at peace within yourself, you’re always going to be looking for a fix somewhere. Whether you’re an addict, an alcoholic, a sex addict, or whatever else, it’s really a hole in your soul. You’re the only one who can fill it.

7 thoughts on “The Great Persecution”