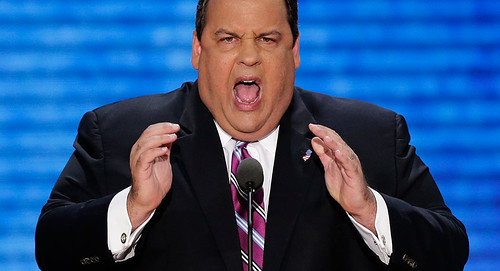 Looks like the People’s Goombah has his mammary gland caught in the wringer! Now we will see a desperate attempt to tamp down the problem with a resignation from the senior staffer, but I doubt that will work. The fact is, the rest of the country is beginning to see Chris Christie as the ruthless bully he really is:

Private messages between Governor’s Christie’s deputy chief of staff and two of his top executives at the Port Authority reveal a vindictive effort to create “traffic problems in Fort Lee” by shutting lanes to the George Washington Bridge and apparent pleasure at the resulting gridlock.

The messages are replete with references and insults to Fort Lee’s mayor, who had failed to endorse Christie for re-election and they chronicle how they tried to reach Port Authority officials in a vain effort to eliminate the paralyzing gridlock that overwhelmed his town of 35,000 which sits in the shadow of the bridge, the world’s busiest.

The documents obtained by The Record raise serious doubts about months of claims by the Christie administration that the September closures of local access lanes to the George Washington Bridge were part of a traffic study initiated solely by the Port Authority.

Instead, they show that one of the governor’s top aides was deeply involved in the decision to choke off the borough’s access to the bridge, and they provide the strongest indication yet that it was part of a politically-motivated vendetta—a notion that Christie has publicly denied.

Time for some traffic problems in Fort Lee,” Bridget Anne Kelly, one of three deputies on Christie’s senior staff, wrote to David Wildstein, a top Christie executive at the Port Authority, on Aug. 13, about three weeks before the closures. Wildstein, the official who ordered the closures and who resigned last month amid the escalating scandal, wrote back: “Got it.”

Other top Christie associates mentioned in or copied on the email chain, all after the top New York appointee at the authority ordered the lanes reopened, include David Samson, the chairman of the agency; Bill Stepien, Christie’s re-election campaign manager and the newly appointed state GOP chairman; and Michael Drewniak, Christie’s spokesman.

Christie has previously said that no one in his staff or campaign was involved in the lane closings, and he has dismissed questions about political retribution by joking that he moved the traffic cones himself.

But the private messages, mostly sent through personal e-mails accounts, indicate that Kelly, a senior staff member in the governor’s office, was involved in the planning and received updates during the week of the traffic jams. She was also informed that week that Christie’s executives at the Port Authority were ignoring the Fort Lee mayor’s desperate attempts to get a reason for the sudden unannounced closures, as the borough’s first responders struggled to respond to emergencies and buses arrived late on the first day of school.

One thought on “A bridge too far”