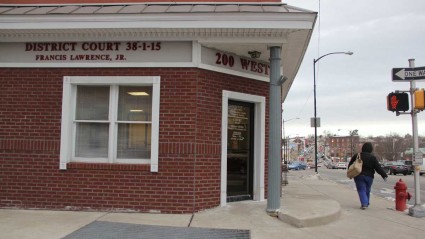 If I recall correctly, there is already a legal provision where the defendant can sign an affidavit that you can’t afford to pay the money, but this district justice seems to have decided to make his own rules:

Defendants in Montgomery County said they were repeatedly sent to jail by a district judge over fines and court costs they didn’t have the money to pay. Court observers say it’s happening more frequently across Pennsylvania.

Anna Lisa Wodarski made a call to District Court 38-1-15 in Norristown the day after she learned there’s a bench warrant out for her arrest. She hadn’t responded to an open container ticket she received back in 2012. Now, she would like to get the warrants lifted until she has money to pay the fine.

The woman on the phone told her she would need to come in with the $50 fee for a hearing, visibly frustrating Wodarski.

She turned away and whispered, “This is why I want a drink.” It’s a half joke. She’s a recovering alcoholic living in transitional housing for women on probation. She still reports to a probation officer for an old assault conviction.

According to court records, Lawrence sent people to jail 228 times from 2011 through the middle of December 2013 for “failure to pay collateral.” That’s money paid in advance of a plea, used here sort of like bail to make sure defendants attend the hearing to contest the ticket or the fine they’re asked to pay. These could be traffic tickets, having an open container in public or failing to keep your dog on a leash.

Wodarski and a half-dozen other defendants contacted said they were sent to jail for costs they didn’t have the money to pay.

This is illegal, according to Vic Walczak, legal director for the ACLU of Pennsylvania.

“What is perfectly clear under both the U.S. Constitution and the Pennsylvania Rules of Criminal Procedure is that you cannot send someone to jail if they cannot afford to pay the fine,” Waldzak said, “because that’s the equivalent of having a debtor’s prison — of putting someone in jail simply because they’re poor.”

People are going to jail in advance of a hearing often enough that the Pennsylvania Criminal Procedural Rules Committee, lawyers and judges who look at issues in the system have proposed changes to the judicial code, emphasizing that jail should be a last resort.

Records show this happening in Montgomery County at least as far back as 1999, with people spending from a day to a month in the county jail. Each day behind bars was worth $40 towards their total fines and costs.