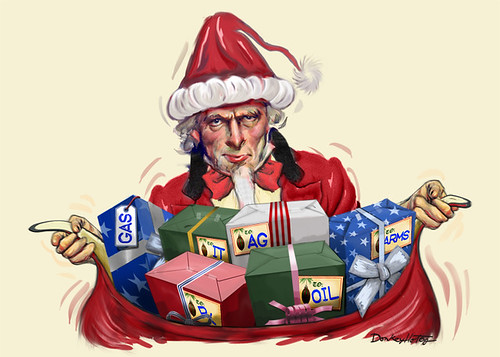 Send this one to your teabagger relatives:

Remember when President Obama was lambasted for saying “you didn’t build that”? Turns out he was right, at least when it comes to lots of stuff built by world’s wealthiest corporate behemoths. That’s the takeaway from a new study of 25,000 major taxpayer subsidy deals over the last two decades.

Entitled “Subsidizing the Corporate One Percent,” the report from the taxpayer watchdog group Good Jobs First shows that the largest corporations in the world aren’t models of self-sufficiency and unbridled capitalism. To the contrary, they continue to receive tens of billions of dollars in government handouts. Such subsidies might be a bit more defensible if they were being doled out in a way that promoted upstart entrepreneurialism. But as the study also shows, a full “three-quarters of all the economic development dollars awarded and disclosed by state and local governments have gone to just 965 large corporations” — not to the small businesses and startups that politicians so often pretend to care about.

The true beneficiaries of subsidies are often hidden under layers of holding companies, shell firms and complex ownership agreements. But Good Jobs First did the tedious work of connecting the subsidies to the parent firms. In the process, the group discovered that a whopping $110 billion — or 75 percent of cumulative disclosed subsidy dollars — are going to these 965 large companies. Fortune 500 firms alone receive more than 16,000 subsidies at a total cost of $63 billion. Additionally, eight out of the top 20 firms receiving U.S. taxpayer subsidies are not even U.S. companies, meaning American taxpayers are being forced to directly subsidize foreign firms.

These kind of handouts, of course, are the opposite of anything having to do with a “free market.” They are the definition of government intervention in the market. Yet, the free-market image of companies is rarely tarnished when those companies accept the huge welfare payments.

Consider Koch Industries. Despite the Koch Brothers being the biggest financiers of the anti-government right, and despite their billing as libertarian “free market” activists, their company has relied on $88 million worth of government subsidies.

Similarly, behold the big tech firms. They are often portrayed as self-made up-from-the-bootstraps success stories. Yet, as Good Jobs First shows, they are among the biggest recipients of the subsidies.

2 thoughts on “You really didn’t build that”