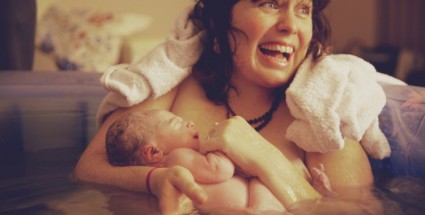 Barring high-risk factors. As an apprentice midwife, I learned that almost all of those “sudden” childbirth emergencies were predictable — and the ones that weren’t usually resulted in the death of the mother even if she gave birth in a hospital. I’ve often wondered why we didn’t move to a system like they have in the U.K., and I can tell you with this new report that we will again be flooded with statements from the American College of Obstetrics and Gynecology explaining why American women are somehow different, and why it could never work here. And none of their concern, of course, will arise from the fact that American childbirth as practiced is a cash cow for hospitals:

LONDON — Reversing a generation of guidance on childbirth, Britain’s national health service on Wednesday advised healthy women that it was safer to have their babies at home, or in a birth center, than in a hospital.

Women with uncomplicated pregnancies — about 45 percent of the total — were better off in the hands of midwives than hospital doctors during birth, according to new guidelines by the National Institute for Health and Care Excellence. For these low-risk mothers-to-be, giving birth in a traditional maternity ward increased the chances of surgical intervention and therefore infection, the regulator said.

Hospital births were more likely to end in cesarean sections or involve episiotomies, a government financed 2011 study carried out by researchers at Oxford University showed. Women were more likely to be given epidurals, which numb the pain of labor but also increase the risk of a protracted birth that required forceps and damaged the perineum.

The findings could affect how hundreds of thousands of British women think about one of the biggest questions facing them. Nine in 10 of the roughly 700,000 babies born every year in England and Wales were delivered in a hospital.

As recently as 2007, the guidelines had advised women to be “cautious” about home birth in the absence of conclusive risk assessments.

Mark Baker, clinical practice director for the health institute, said first-time mothers with low birth risks would now be advised that a midwife-led unit would be particularly suitable for them, while mothers who already have given birth would be told that a home birth would be equally safe for the baby and safer for the mother than a hospital. But women are still free to choose the option they are most comfortable with, Dr. Baker said. “This is all about women having a choice,” he said.

Not everyone was at ease with the new guidelines. “Things can go wrong very easily and we do feel this advice could be dangerous,” Lucy Jolin of the Birth Trauma Association told the BBC.

So far doctors have not expressed any outrage over the decision. “If we had done this 20 years ago there would have been a revolution,” Dr. Baker said. “The penny has dropped. We’ve won the argument.”

With the exception of the Netherlands, where home births have long been popular and relatively widespread, few developed countries have significant numbers of women opting for nonhospital deliveries. In the United States, where a culture of litigation adds a layer of complication, only 1.36 percent of births took place outside a hospital in 2012. Two-thirds of those nonhospital births took place at home and 29 percent at free-standing birthing centers, according to the National Center for Health Statistics.