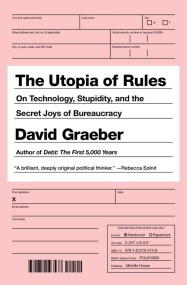 Bureaucracy lies. The point of coming up with rules is to ensure that they’re evenly applied. But everyone knows that rules aren’t evenly applied. When we replace informal, arbitrary systems with formal sets of rules, the arbitrariness moves up a level — moves up to “who has to follow the rules and who doesn’t.” Sell a joint, go to jail. Launder billions for the Sinaloa cartel, defer some of your bonus for a few weeks.

“Everybody knows” would be a good alternative title for this book. Like the Leonard Cohen song, reading this book (especially the introduction, which is the sort of thing that someone should turn into a 20-minute info-video) makes you recognize that there’s a huge, awful, lying center to the world as we inhabit it. As Graeber says, bureaucracies are supposed to be meritocracies where people are hired and promoted based on talent, not because of birth or personal connections. But we all know that’s bullshit — and we also all know that the only way to rise in the Bureaucratic Utopia is to pretend that it isn’t bullshit.

Graeber wants us to demand the impossible. To stop making capitalism. To wake up in the morning and just walk away from the lie. To refuse the intimidation of latent violence. To reclaim the critique of rules and privilege that was the Left’s to take to the streets in 1968.

In these three essays, a brilliant introduction, and a fabulous afterword (about the relationship of Christopher Nolan’s Batman movies to Occupy and capitalism), Graber manages to tease out something wordless and important, about how we might imagine a world where we don’t need violence to keep us in check and stop letting the people who say we do run the show.

The Utopia of Rules: On Technology, Stupidity, and the Secret Joys of Bureaucracy

One thought on “The Utopia of Rules”