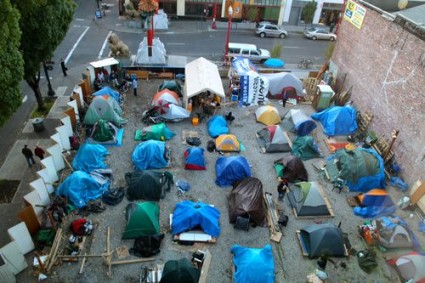 Towns will do anything to harass homeless people now. This is one of the more egregious examples I’ve seen, taking place in Portland, Oregon:

This past July, a homeless Portland woman was charged with third-degree theft when she plugged her cellphone charger into an outlet on a sidewalk planter box in Old Town.

Cases in which people are charged with theft for plugging electronic devices into private outlets are uncommon, but defense attorneys say they’re another example of resources wasted for frivolous offenses.

In this case, the theft was first reported by Portland Patrol Inc., and two Portland police officers followed up to issue the woman and her co-defendant, a homeless man who was also charging his cellphone at the planter box outlet, citations to appear in court for third-degree theft of services — a Class C misdemeanor.

According to the Electrical Research Institute, it costs about 25 cents a year to charge the average mobile phone. If the phone in this scenario had gone from zero charge to full charge, the cost would have amounted to mere fractions of a penny.

“Jackie,” (who did not want her real name used), says she was shocked when four uniformed officers all agreed her actions warranted not only their response, but also charges and a court summons.

Jackie has never been convicted of a crime. If this charge led to a conviction, it would mean the difference between checking “no” or “yes” to questions about criminal history on a job or housing application.

Her attorney, Metropolitan Public Defender Stacy Du Clos, says Jackie’s main concern at the time was how this pending case might hurt her chances of getting a roof over her head – she’s homeless and on several waiting lists for affordable housing units.

Additionally, a theft charge is more likely to be associated with shoplifting or taking personal property, not plugging a charger into an electrical outlet. Jackie says the charge would give the wrong impression of what she had done, should someone see her record.

“It’s just my sense of right and wrong, and it just feels so damn wrong,” says Jackie. “The amount of time and money and wasted resources with the judge, the lawyers, the clerks, the police and on and on.”

“It doesn’t happen very often, but when it does, it’s just insane,” says Fox. “The (case) that I had was somebody charging their phone by the Greyhound bus station. Don’t you have a reasonable expectation that an outlet near the bus station would be OK?”

Community Court is an effective way to avoid the higher costs associated with processing misdemeanor crimes through Circuit Court, and it can help people who need social services, like drug or alcohol treatment, says Fox.

Fox says the majority of charges sent to Community Court get reduced from misdemeanors to violations. According to numbers compiled by Clean and Safe District, between 2002 and 2012, about 67 percent of defendants processed through Community Court closed their cases in full compliance.

If defendants don’t show up for their initial arraignment, they get a bench warrant – which can lead to an arrest – and if they don’t show up after being ordered to do community service or treatment, they’re issued a fine ranging from $435 to $635.

“Given the population we’re dealing with here, it’s like trying to squeeze blood out of a turnip,” says Fox.

4 thoughts on “The milk of human kindness”