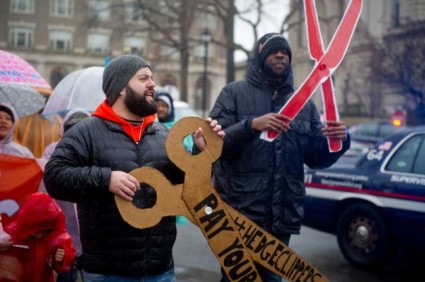 Brilliant idea. (Be sure to go their site at hedgeclippers.org and get on their mailing list.) Now’s the time to start building public support for repealing those hefty tax credits hedge funders make:

Two weeks ago, several busloads of New Yorkers made a pilgrimage to Greenwich, Conn., to visit the waterfront estate of the hedge fund titan Paul Tudor Jones II, where, suffice it to say, they were not invited in to see the china. It was a rainy Saturday afternoon and the protesters, many of them ordinary working people who have felt cheated by the inequities of a tax system that favors the rarefied few, were there to call attention to Mr. Jones’s educational agenda, built on the premise that the extravagantly rich know better how to teach reading, and to his support of Republican candidates and causes in the New York State Legislature that disadvantage the poor and working class.

It is this kind of political spending, a total of $1.6 million over the past 12 years, they maintain, that undermines his philanthropic efforts through the Robin Hood Foundation, the poverty-fighting charity he created. To civilians, of course, Mr. Jones can seem like someone needing remedial work in cause and effect, a billionaire whose industry thrives on extracting economic value rather than producing it, and yet is comfortable speaking on the corrosive impact of inequality.

“When we begin to put justness on par with profits,” Mr. Jones said in a TED Talk recently, “then we get the most valuable thing in the world. We get back our humanity.” Hearing that is like listening to the Real Housewives of Orange County say that once we start prizing restraint over consumer spectacle, we’ll be well on our way to a new chapter in cultural dignity.

Those who made the trip to Connecticut were marching on behalf of a group called the Hedge Clippers, a nascent organization backed by the American Federation of Teachers, prominent labor and community groups, and Zephyr Teachout, the liberal former Democratic candidate for governor. It is aimed at outlining the ways hedge funds bleed the economy through self-interested practice and then extend the damage through the lavish purchase of political influence. According to an analysis by the group, hedge fund managers have made $40 million in political contributions in New York State over the past 15 years, with Gov. Andrew M. Cuomo receiving close to $5 million. Many of those donors are prominent supporters of charter schools, and nearly all would presumably denounce the elimination of tax loopholes that magnify their fortunes.

The Hedge Clippers produce and issue reports at a speed that would make many graduate students envious. This week they released a paper detailing the flow of money from hedge fund managers and high-frequency traders into Rahm Emanuel’s coffers; in Chicago, Mr. Emanuel’s mayoral tenure has been challenged by a bid from the left. Another report offered a list of buyers at One57, the ultraluxury condominium in Manhattan that benefited from considerable tax breaks.

In New York, the Hedge Clippers have been protesting at a very lively pace. One rally was recently held outside 15 Central Park West, a luxury tower that functions as a financial-industry dormitory. That day the focus was on the hedge fund manager Daniel S. Loeb, the chairman of the Success Academy charter school network, who bought an apartment in the building seven years ago. At the rally, the Hedge Clippers offered a tutorial to the public on the complicated ways hedge funds work and accumulate money — the so-called two-and-twenty compensation system, for instance — and the ways in which their tax burdens are kept relatively low.