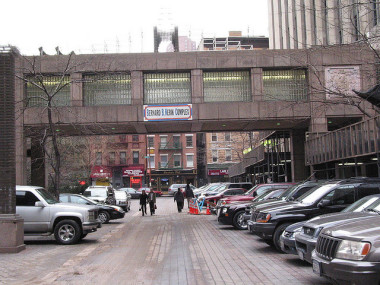 A little over a week ago, a 23-year-old construction worker in the Bronx named Jeff Rivera got in an argument with his wife, from whom he is separated. During the argument, he struck her door, pushing in the screen.

Rivera had no reason to expect that he’d have to post bail to stay out of jail. Not only was the offense relatively minor, but he has no criminal history, is employed, and has a child and every reason in the world to show up for his trial. Judges are only supposed to set bail for two main reasons: if the defendant is a flight risk, or if he or she is a danger to the community.

“Bail is for guaranteeing that a person appears at trial. It’s not a punishment,” says Rivera’s lawyer, Alexandra Bonacarti of New York County Defender Services. “There’s absolutely no reason to set bail on someone like Jeff who has a job, a child, no criminal history, no history of missing a court date, and is not charged with a violent crime.”

But Rivera was unlucky. He went to court and stood before a judge who decided to set bail of $500 in his case.

Rivera didn’t have the money, which means he’d essentially committed two crimes, the second more serious than the first: he’d pushed in a screen door, and he didn’t have $500.

He was shocked to find that he was about to be carted off to the Manhattan Detention Complex, an infamous place also known as the Tombs. “I was shocked. There are real criminals in there, murderers and rapists,” he says. “You’ve got to be real careful about what you say in there. One word can set somebody off.”

Rivera spent the weekend before last in the Tombs, wondering how long he’d be in. As the hours ticked by, he started to worry about all kinds of things.

“Things happen in there,” he says. “I was worried, if I get in a fight, I might be charged with another crime. And I’d be in there longer.”

He survived the weekend. Then, last Monday night, some inmates got into an argument, one that spilled over into the next morning, when a real fight started. Rivera managed to stay out of the melee, but still got hurt later that day when his fingers got caught in a cell door.

Finally, last Wednesday, Rivera was released on his own recognizance after the city failed to get a supporting deposition from the wife. He never made bail. The case is still open, and he has a court date in July, though the DA has indicated to Bonacarti that he’s considering a dismissal. In total, Rivera spent over six days in the Tombs.

“I shouldn’t have been in there for six days,” he says today. “And really not for five days, or four, or three. It’s crazy.”

Rivera was lucky. His boss was understanding about what happened, so he’ll be back at work. And he appears not to have broken his hand.

But it could have been worse, and often is. Bonacarti says the problem of people being jailed for the crime of not having enough money is something public defenders like her see regularly. “It happens all the time,” she says. “People have no idea.”