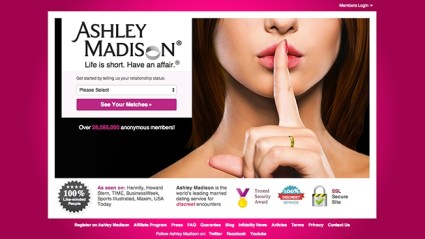 So a bunch of hackers have the entire database from Ashley Madison, the infidelity site, and a lot of people must be very nervous this morning:

The hackers say they’ve compromised the entire database of parent company Avid Life Media, whose chief executive has confirmed the hack to security blog KrebsOnSecurity and says the company is “working diligently and feverishly” to take down files that the hackers have already posted online. The chief exec says the hack appears to have been an inside job carried out by somebody “that was not an employee but certainly had touched our technical services.”

In a manifesto seen by Krebs, hackers calling themselves the “Impact Team” describe the site’s clients as “cheating dirtbags” and accuse the company of cheating users by charging them $19 for a “full delete” of personal information and then keeping their details regardless. They say the information they will release includes “secret sexual fantasies,” as well as names and credit card details. Ashley Madison is still online for now, but perhaps it should change its tagline from “Life Is Short, Have an Affair” to “It’s All Fun and Games Until Everybody Finds Out,” quips Daniel Cooper at Engadget. (But there may not be 37 million real clients: An ex-employee claims she was paid to create fake Ashley Madison profiles to attract male users.)