The computer models are all over the place on this one, but the good news is (fingers crossed), the majority of them this morning have Hurricane Joaquin moving offshore. So there’s that for those of us on the coast (not so much for the Bahamas, where the slow-moving storm will sit all day).

Even if Joaquin doesn’t make a direct landfall, there will still be major flooding for much of the east/southeast. This storm is getting stronger, and your basic Historic Rainfall Event is expected, even if it only sideswipes the coast. (They’re saying Athens, Georgia may get as much as two feet of rain.) This is the same area that’s had heavy rain all week unrelated to this storm, and we’ve already seen serious beach erosion and flooding.

But the other possibly very bad news is, this morning’s National Hurricane Center model still shows it making landfall somewhere in the DC-Phila-NYC corridor, and because of the dense population, that could be very, very bad.

So stay informed and track this storm. 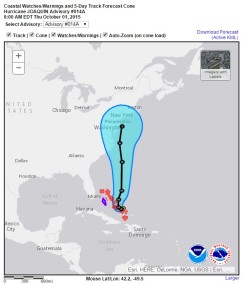 Our satellites capture data from Hurricane #Joaquin as it intensifies in the Atlantic Ocean: http://t.co/5MUARvyLmS pic.twitter.com/wev2vvpBsM

I don't recall an *ensemble* model rain forecast this high. A #flood disaster possible, regardless of #Joaquin. pic.twitter.com/UkpQBxUyPC