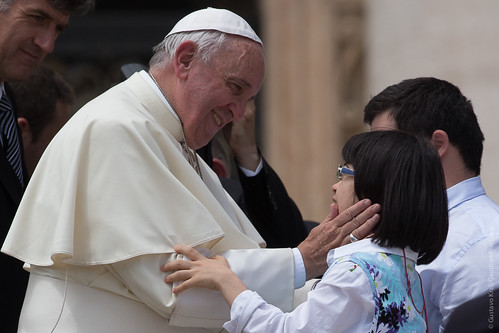 I spent a little time Wednesday night examining my conscience, as we used to say around the ol’ confessional, as regards the meeting between Papa Francesco and noted civic layabout Kim Davis. This contemplation was prompted by two things: first, an e-conversation I had with someone who had been part of the papal travelling party and second, the appearance of E. J. Dionne on Lawrence O’Donnell’s show on MSNBC. According to the first person, there were a great number of people during the pope’s tour who were simply hustled in and out for informal private audiences. According to Dionne, the meeting between Davis and the pope was brokered by Archbishop Carlo Vigano, the papal nuncio to the United States at whose residence the pope stayed during his time in Washington, which is when the meeting took place. Together, these facts set off my Spidey Sense about Vatican chicanery.

Before we continue, let us stipulate a few things. First of all, let us stipulate that there are more than a few members of the Church’s permanent bureaucracy, both within the Clan Of The Red Beanie and without, who are not happy that this gentleman got elected Pope, and who are not happy with what he’s done and said since he was. Second, let us stipulate that many members of this group are loyal to both former pope Josef Ratzinger and, through him, to the memory (and to what they perceive as the legacy) of John Paul II who, for good and ill, had a much different idea of how to wield a papacy than Papa Francesco does. Third, let us stipulate that this opposition to the current pope has been active and vocal,to say nothing of paranoid. Finally, let us stipulate that, for over 2000 years, the Vatican has been a hotbed of intrigue, betrayal, and sanctified ratfcking on a very high scale. (It also has been a hotbed of, well, hot beds, but that’s neither here nor there at the moment.) So, if you’re one of these people, and you’re looking to ratfck the pope’s visit to the United States, and to his agenda in general, you’d be looking to put him in a box. So, how would you do that?

Ratzinger’s fingerprints are all over this story. Vigano is a Benedict loyalist. Robert Moynihan, whose newsletter, Inside The Vatican, got the story first, is an actual lifelong Ratzinger protégé. And the Vatican press office acted just the way I’d want it to act, if I were the guy setting this up. First, it issues a silly non-denial denial, and then it merely confirms that the meeting occurred. At which point, the office clams up, leaving the story festering out there in the news cycle, and leaving the pope out there in the American culture war to twist in the wind. And, if this scenario is in any way accurate, it had its desired effect. The impact of what the pope actually said and did in America has been fairly well ratfcked.

Of course, this speculation depends vitally on the proposition that Papa Francesco didn’t know who Kim Davis was, or anything about her current public display of faith-based goldbricking. I don’t find that so very hard to believe; for all the attention it’s gotten over here, it’s not an international story of any consequence. (Whether he should have known about it, or have been briefed about it beforehand, is another matter entirely, as Dan Savage pointed out on Chris Hayes’s program Wednesday night.)  And, it can be argued, I guess, that I’m engaging in apologetics here. But the whole thing is just a little too hinky, and I know too well how these birds operate. They’ve had millennia to get really good at it.

2 thoughts on “So maybe the pope was set up”