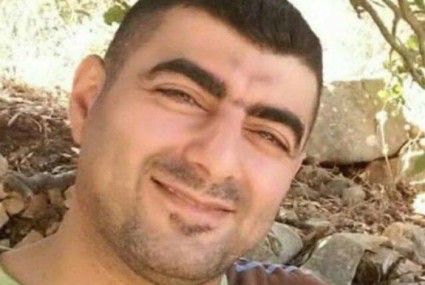 He is the Lebanese man who threw himself on a suicide bomber in Beirut last week, saving countless others:

A father, with his young daughter watching, sacrificed himself to save others when terrorists struck Beirut last week.

The day before the horrific massacre in central Paris left the world reeling, two attacks during rush hour in Lebanon’s capital city killed 45 and wounded more than 200 others.

If not for the heroic actions of one man, the death toll would have been much higher. And now, days later, his heroism is being recognized.

Adel Termos was walking in an open-air market with his daughter, according to reports, when the first suicide bomber detonated his explosives. Amid the instant chaos, Termos spotted the second bomber preparing to blow himself up, and made the quick decision to tackle him to the ground. The bomb went off, killing Termos, but saving countless others, including his daughter’s.

“There are many, many families, hundreds probably, who owe their completeness to his sacrifice,” Elie Fares, a blogger and physician in Beirut,told Public Radio International in an interview last week.

“In a way, Adel Termos broke human nature of self-preservation. His heroism transcended his own life to save others,” Fares told The Washington Post in an e-mail Monday. “To make that kind of decision in a split second, to decide that you’d rather save hundreds than to go back home to your family, to decide that the collective lives of those around you are more important than your own is something that I think no one will ever understand.”

Fares had immediately shared Termos’s story, and it was covered by local media there, but it went largely unnoticed by the international community, especially as news of the Paris attacks quickly consumed the news cycle.

After the Thursday attacks, Fares, on his own blog, wrote about Termos:

“Tonight, Adel is no longer of this world, but his legacy will live on for years, and the repercussions of his heroism will become a tale to tell: Adel is the reason we are not talking about fatalities in the three digits today, he is the reason some families still have their sons, daughters, fathers and mothers, he is a Lebanese hero whose name should be front and center in every single outlet.”