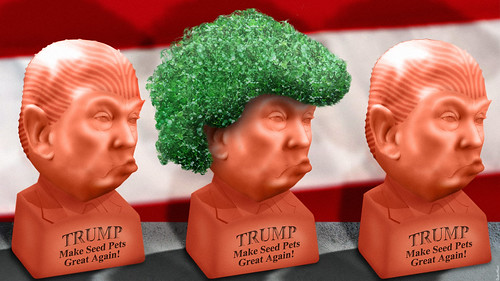 This is interesting. Yes, Donald Trump is clearly mentally ill. You almost have to have something wrong with you to want to be president, but there is that and there is this:

A striking number of leading mental health experts are concerned enough about the possibility of a Trump presidency that they’re willing to speak out, publicly, about the candidate’s “Textbook narcissistic personality disorder.”

Michaelis went on to explain,

Going on, Michaelis described Trump’s constant belittling of other people as a ‘symptom’ of a deeper problem.

“To degrade people is really part of a cluster-B personality disorder: it’s antisocial and shows a lack of remorse for other people. The way to make it O.K. to attack someone verbally, psychologically, or physically is to lower them. That’s what he’s doing.”

Michaelis expressed his concerns about a Trump presidency, saying,

“He’s applying for the greatest job in the land, the greatest task of which is to serve, but there’s nothing about the man that is service-oriented. He’s only serving himself.”

Indeed, narcissism is characterized with by an exaggerated sense of self-importance, as well as a lack of concern or empathy toward others.

While it was once thought that narcissists were overcompensating for low self-esteem, the latest research suggests that narcissistic personality disorder is defined by a sincere belief that you are superior to others.

According to Psychology Today, “the latest evidence indicates that narcissists are actually secure or grandiose,” not just on a superficial level, but on a subconscious level as well.

[…] “He’s very easy to diagnose,” psychotherapist Charlotte Prozan told Vanity Fair. “In the first debate, he talked over people and was domineering. He’ll do anything to demean others,” she said.

George Simon, a clinical psychologist who specializes in manipulative personalities, told Vanity Fair that Trump is “so classic that I’m archiving video clips of him to use in workshops because there’s no better example of his characteristics.” He went on to say that without Trump, he “would have had to hire actors and write vignettes,” to illustrate the narcissistic personality disorder for his students. He described the candidate as “a dream come true,” at least from the perspective of having a boatload of free material to use during student lectures.

One thought on “A ‘textbook case’”