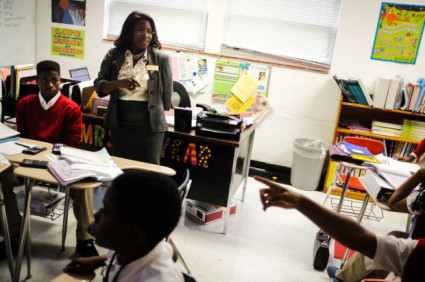 We have been trained to be cynical and hopeless, which is easy to do with a steady stream of bad news. But if we don’t pay attention, we miss the many good, creative people who are doing such wonderful things! Watch the stories like this:

JENNINGS, Mo. — School districts don’t usually operate homeless shelters for their students. Nor do they often run food banks or have a system in place to provide whatever clothes kids need. Few offer regular access to pediatricians and mental health counselors, or make washers and dryers available to families desperate to get clean.

But the Jennings School District — serving about 3,000 students in a low-income, predominantly African American jurisdiction just north of St. Louis — does all of these things and more. When Superintendent Tiffany Anderson arrived here 3 1/2 years ago, she was determined to clear the barriers that so often keep poor kids from learning. And her approach has helped fuel a dramatic turnaround in Jennings, which has long been among the lowest-performing school districts in Missouri.

“Schools can do so much to really impact poverty,” Anderson said. “Some people think if you do all this other stuff, it takes away from focusing on instruction, when really it ensures that you can take kids further academically.”

Public education has long felt like a small and fruitless weapon against this town’s generational poverty. But that’s starting to change. Academic achievement, attendance and high school graduation rates have improved since Anderson’s arrival, and, this month, state officials announced that as a result of the improvements, Jennings had reached full accreditation for the first time in more than a decade.

Gwen McDile, a homeless 17-year-old in Jennings, missed so much school this fall — nearly one day in three — that it seemed she would be unlikely to graduate in June. But then she was invited to move into Hope House, a shelter the school system recently opened to give students like her a stable place to live.

One thought on “Go read it, it made me cry”